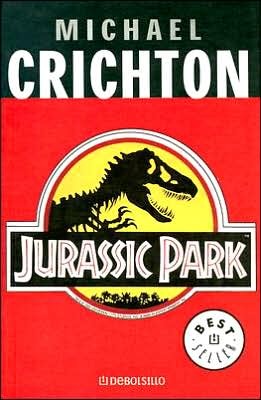 This is the first of two Michael Crichton books I'll be highlighting for this year's A-Z Challenge. And of the two, this one is the more popular (if not his most popular), largely due to its 1993 blockbuster movie adaptation directed by Steven Spielberg.

In Jurassic Park, scientists have found a way to clone dinosaurs using DNA recovered from mosquitoes trapped in fossilized tree resins. And what better way to put that scientific breakthrough to good use than to create an island-wide theme park filled with said dinosaurs. The operation is funded by John Hammond, the billionaire CEO of InGen, a company that specializes in genetic engineering.

To make sure "Jurassic Park" is ready for the general public (despite evidence pointing to the contrary), Mr. Hammond hires a paleontologist named Alan Grant to make an assessment of the facility. He is accompanied by Ellie Sattler, a  paleobotanist, and in a show of goodwill, Mr. Hammond's very own grandchildren. They are introduced to Ian Malcolm, a mathematician who believes the park is subject to the laws of chaos theory.

And just like clockwork, Ian Malcolm is proven right when a shady InGen employee named Dennis Nedry tries to steal a number of frozen dinosaur embryos, in a bid to sell them off to a rival company. He shuts down the facility's security system in order to reach the embryos, but the island is hit by a tropical storm during the theft. The dinosaurs escape, and needless to say, all manner of chaos ensue.

Michael Crichton is one of my favorite writers, even though most of his science-fiction books tend to follow the same pattern, wherein a team of scientists (each a specialist in his or her respective field) is assembled to investigate an ongoing or potential crisis. We saw this happen in The Andromeda Strain, Congo and Sphere. And the same formula works just as effectively in Jurassic Park.
Posted by Michael Abayomi at 08:00