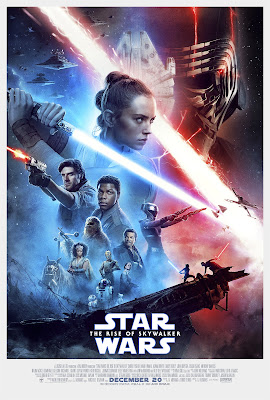 Heading into 2019, there was truly only one movie I knew I absolutely had to see at all cost. And no, it was not Avengers: Endgame, as much as I loved that movie and Avengers: Infinity War before it. I am of course referring to Star Wars: The Rise of Skywalker, the ninth and what is currently being billed as the final installment of the decades-spanning Skywalker Saga. This was primarily because I had been so blown away by the previous installment, The Last Jedi, that the requisite two-year wait for the release of this one had felt unbearably long. Well, that wait is finally over and I am pleased to report that it was worth every second of it, at least to a degree.

Much of the film's plot had been kept under wraps leading up to its release, so I won't be discussing any story details beyond what was already shown in the trailers. To summarize then: the sith are back in the form of Emperor Palpatine. The First Order continues to spread its tyranny across the galaxy. The Resistance is still holding on to hope where there seems to be none, as their leader, General Leia Organa, helps Rey complete her Jedi training in preparation for the climactic showdown to come. That's the general premise of the film, but you're probably more curious to find out how all of that plays out on screen.

Well, there's a lot to love about Star Wars: The Rise of Skywalker, just as there is a lot that might not sit well with fans and casual audiences alike. It is hard to talk about any of them in specific details without going into spoiler territory. But I'll say this much: the movie is about as visually stunning as these movies can get, and the plot moves at an almost breakneck pace, doling out action setpiece after action setpiece. It is just a shame that the story holding it all together is not the best the series has seen, and some of the creative choices made, while bold and ambitious, felt forced, and their associated payoffs unearned.

My biggest gripe is how much the movie felt like an apology for The Last Jedi. This is especially frustrating for me because I frigging loved The Last Jedi, as divisive as it was, and I thought its director, Rian Johnson, had made some very interesting choices with the movie that was sure to take the entire Skywalker Saga into a bold, new direction. Alas, I was wrong, and for the first time I could truly feel the pain of this current trilogy not having a clearly mapped out endgame from the onset. It is obvious that J. J. Abrams had tried his hardest to please fans on both sides of the fence, while also smoothing over those narrative choices that didn't sit too well with audiences. But as we all already know, it is impossible to please everyone.

It was always going to be an herculean task, wrapping up the current trilogy while also delivering a fitting end to the much-beloved Skywalker Saga. The Rise of Skywalker is proof that it should've taken a whole lot more than one movie to do so, and definitely a lot more planning and proper foreshadowing. There were simply too many things going on in this one movie, so much so that I know I'd need to see it again just to try and unpack it all. The one thing I think the movie doesn't fail at though is in delivering the kind of fan service we've all come to expect from the franchise.

There were several moments during Star Wars: The Rise of Skywalker where I totally geeked out as the theater screen was filled with pure, jaw-dropping spectacle. If you're a fan of the franchise and its storied history, then chances are you will find yourself geeking out as well. It might not be the best film in the just-concluded sequel trilogy, but as a celebration of the last 42 years of the Star Wars franchise as a whole, the film delivers in spades. And sometimes, that is the best a fan could hope for.
Posted by Michael Abayomi at 07:41