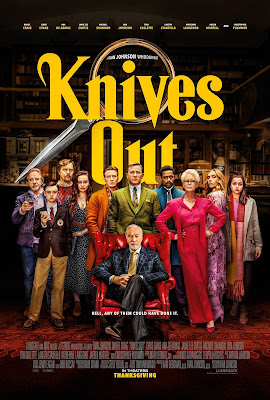 For a very vocal online minority, Rian Johnson would forever be the man that "ruined Star Wars." Not for me though, as I still stand by my original position that The Last Jedi is one of the very best Star Wars films. Talk of not living up to the legacy of the older films aside, the movie demonstrated the director's eye for filmmaking and quality storytelling, much like his prior work on Breaking Bad and Looper. So of course I was already sold on his next project even before I knew what it was.

Billed as a modern take on the classic whodunit formula, Rian Johnson's Knives Out is a murder mystery that stars an ensemble cast of A-listers. These include Daniel Craig, Chris Evans, Jaime Lee Curtis, Toni Collette and Christopher Plummer. The mystery at the center of the film is the death (murder?) of Harlan Thrombley (Christopher Plummer), a famous mystery writer that is found dead on the morning following his 85th birthday with what appears to be a self-inflicted knife wound.

The fact that his entire extended family was gathered at their family home at the time of death makes pretty much everyone a suspect. And at least three of them have very strong motives behind why they would want the eccentric writer dead. So it is left to the equally-eccentric private detective, Benoit Blanc (Daniel Craig), and police investigators Elliot (Lakeith Stanfield) and Wagner (Noah Segan), to sift through all the motives and alibis and get to the bottom of the mystery.

The less that is said about the plot of Knives Out, the better, as half the fun comes from trying to piece together the pieces of the puzzle ahead of the on-screen actors themselves. But needless to say, there are several twists and turns along the way. What elevates the movie above other murder mysteries though is the way it manages to play around genre tropes while keeping the audience guessing with each new reveal. The end result is a movie that is part parody, part homage, but full-blown satisfying.
Posted by Michael Abayomi at 10:33