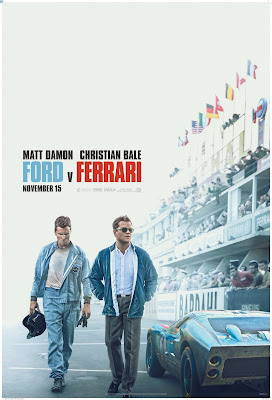 While I've never had any kind of affinity towards sports in general, I've always had a soft spot for sports dramas. This is mainly due to how they (read: the good ones) are anchored upon larger-than-life personalities, which helps them go beyond the viewer's enjoyment of the particular sport in question. Ford v Ferrari is no different, except it also boasts some truly exhilarating race sequences and several laugh-out-loud moments that had me on the edge of my seat for the better part of its lengthy runtime.

Set in the mid 1960s, the film depicts the rivalry between the two car manufacturers, Ford and Ferrari. The rivalry is sparked into being after the former attempts to buy the latter but the deal falls through due to their inability to reach an agreement on which of the two companies would have final say in matters concerning their racing division. This prompts Ford to build a race car within 90 days that would be fast enough to compete in the Ferrari-dominated Le Mans, a grueling 24-hour race in France.

To accomplish this feat, they hire the former racecar driver and engineer, Carroll Shelby (Matt Damon), who in turn must put together a dream team of drivers and engineers that would make this happen. Except things don't sit well between Shelby and Ford after he hires the hot-headed and very eccentric British driver, Ken Miles (Christian Bale). But Shelby is convinced that Ken is one of the only men skilled enough to handle whatever contraption they manage to build before the race, so much so that he is willing to stake everything he has worked for to prove it.

Ford v Ferrari is one of those rare movies that manages to tick all the required boxes without feeling over-produced or soulless. It is beautifully shot and tightly edited to the point where you can actually feel every lurch of the cars on the race track, as though you were sitting there in the cockpit. It is also beautifully acted, with both Matt Damon and Christian Bale giving Oscar-worthy performances.

But I think the highest praise should be reserved for director James Mangold, who somehow manages to keep the two-and-a-half movie moving at a good and steady pace, doling out the laughs and thrills without glossing over any of the human drama at its center.
Posted by Michael Abayomi at 06:19