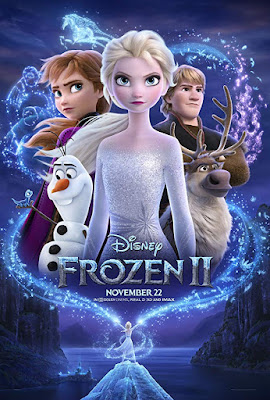 2019 has not been without its fair share of hits and misses. But even so, this has been the only year where we've had up to seven movies gross over a billion dollars worldwide. And with films like Jumanji: The Next Level and Star Wars: The Rise of Skywalker just around the corner, it looks like that number is only going to grow. Whether or not Disney's Frozen II would be joining their ranks is up for debate. What is certain here is that the animated sequel is going to make tons of money this holiday season. The question though is does it deserve to?

Set three years after the events of the first movie, Frozen II finds the sisters Elsa (Idina Menzel) and Anna (Kristen Bell), along with friends Kristoff (Jonathan Groff), Olaf (Josh Gad) and Sven, going on a new adventure into an enchanted forest after Elsa answers the calls of a mysterious voice. This awakens some ancient powers that forces the people of Arendelle out of their homes. Now Elsa must push her magical powers to their limits to protect the entire kingdom, while Kristoff is busy trying to find the right time to propose to Anna.

Frozen II is a good-enough sequel that is sure to please fans of the original. The animation has improved tremendously since the release of the original in 2013, and this is immediately apparent from the very first frame. The soundtrack is also populated with a fresh batch of catchy tunes that will keep viewers humming for weeks to come. Where the movie falters though is with the story itself, a tale of adventure that never quite manages to match the original or break new ground, but still offers enough to remain entertaining in its own right.

It would be interesting if Frozen II matches or even manages to surpass the success of the original. Then we could be talking about having up to ten movies grossing over a billion dollars by the end of the year, eight of which were distributed by Disney. That is simply insane, and further proof that moviegoers would still show up for these movies in droves even in this day and age of streaming services like Netflix and Disney's very own recently-launched Disney+.
Posted by Michael Abayomi at 06:26