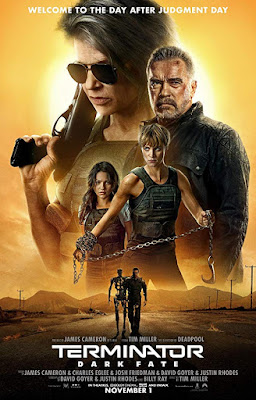 Remember all those times Arnold Schwarzenegger had told us "I'll back back?" Well, the aging action star was not kidding as he returns yet again as one of the titular terminators in Terminator: Dark Fate. Directed by Tim Miller (Deadpool), the films serves as a direct sequel to Terminator 2: Judgement Day, ignoring all of the events that took place in Terminator 3: Rise of the Machines, Terminator: Salvation and Terminator: Genisys, for better or worse.

Not long after Sarah Connor (Linda Hamilton) had managed to prevent Judgement Day, a T-800 (Arnold Schwarzenegger) from the future manages to carry out Skynet's mission to kill the human resistance leader, John Conner. And right off the bat, the film showcases some incredible use of CGI to recreate the likenesses of the three actors from 1991's Terminator 2: Judgement Day. But the focus quickly shifts after a time jump to 2020, when much like the previous films, two time travellers arrive from the future.

The first one is a woman named Grace (Mackenzie Davis), a cybernetically-enhanced soldier from 2042 who has been sent to protect Dani (Natalie Reyes), a girl being hunted by the second time traveller, a Rev-9 terminator (Gabriel Luna) with the ability to split itself into two. The basic premise here is that a new AI called Legion had risen after Skynet's defeat, so while Sarah had prevented Judgement Day, she still couldn't alter humanity's fate. Now she must help Grace and Dani while joining forces with an unlikely ally as they try to prevent the end of humanity once again.

The best thing about Terminator: Dark Fate is the return of the franchise's two leads, Linda Hamilton and Arnold Schwarzenegger. Both actors bring a certain level of charm and chemistry that was sorely missing in the other sequels. The film also boasts some truly "special" special effects as previously mentioned. But it never quite manages to shake that "been there, done that" feeling it leaves you with by retreading much of same story beats from the first two movies.

That said, Terminator: Dark Fate can still be considered a success as it succeeds at bringing the story arch from the first two movies to a somewhat satisfying close, while also leaving the door open to a new chapter in the franchise. Let's just wait and see if it succeeds where it truly counts, at the box office.
Posted by Michael Abayomi at 06:15