It is time for another one of my Year in Review series of posts, a feature I run on this blog at the end of every calendar year. This started all the way back in 2011, and is something I'll most probably continue doing well into the foreseeable future. So between today and Friday, I'll be highlighting my favorite games, TV shows, music, movies and moments from 2019. So sit back, relax and join me as we start by highlighting some of the games that made waves and kept me occupied this past year.

Before I begin, you might notice some glaring omissions from my list of games. Games like Sekiro: Shadows Die Twice, Death Stranding and most notably, Star Wars Jedi: Fallen Order. This is because my PS4 hard drive had crashed earlier in the year, and I haven't been bothered to get a replacement ever since. Blame it on the stunning library of games on the Nintendo Switch I guess. I hope to get around to playing these games someday, but for now, here are the games I'd spent the better part of the year playing.

Capcom kicked off what was to be an incredible year for gaming all the way back in January with the release of Resident Evil 2, a remake of its classic survival horror game originally released in 1998. The third-person action-adventure game puts players in the shoes of Claire Redfield and Leon Kennedy, a police officer who must navigate the horrors of a zombie outbreak on his very first day on the job. The game adopts the same over-the-shoulder camera that was popularized in Resident Evil 4, while boasting some truly drop-dead visuals that bring its eerie locales to life like never before.

EA and Respawn Entertainment pulled a Beyoncé so to speak when they shadow dropped their free-to-play Battle Royale game, Apex Legends. It became one of the fastest growing online games of all time, amassing more than 25 million players by the end of its first week alone. The game had some interesting traversal options like ziplining, which helped differentiate it from the likes of Fortnite. But it was perhaps most notable for the implementation of a ping system, which allowed teammates to communicate frequently used messages and information by simply pointing to an in-game object or area and selecting the appropriate ping.

Capcom continued its winning streak with Devil Mary Cry 5, the latest entry in its hack and slash series. This time around, players get to choose between series veterans Dante and Nero, as well as newcomer, V, each one boasting a unique fighting style and approach to combat. Much like RE2 Remake, the game uses the RE engine, which really helped make the over-the-top action in its cutscenes and gameplay pop like never before. And it all ran at a buttery smooth 60 frames per second, making it one of the definitive hack and slash fighting experiences out there.

The Wii U might not have marked Nintendo's finest hour in the console wars, but it did produce some truly exceptional games during its lifetime. One of those games was Super Mario Maker, a video game that allowed players to create their very own Super Mario levels and share them with others. Super Mario Maker 2 carries over that same crowdsourced mentality, but also comes bundled in with some of the most creative Super Mario levels in a newly-added story mode, making it a must-own for all Nintendo Switch owners looking to get their 2D platforming fix.

Cadence of Hyrule: Crypt of the NecroDancer Featuring The Legend of Zelda

What do you get when you cross The Legend of Zelda, a rhythm game, a roguelike and some truly killer tunes? You get Cadence of Hyrule, that's what. Developed by Brace Yourself Games, it is a game that marks the first (and probably only) time Nintendo would be licensing one of its biggest IPs to an indie developer. And I'm sure glad that they did, because the game has a very addictive gameplay loop that involves hopping around its grid-based, randomly-generated levels in time with the aforementioned killer tunes, which are all renditions of classic The Legend of Zelda themes.

I don't believe I was as excited to play any one game this past year the way I was excited to play Untitled Goose Game. Ever since it was first unveiled in 2017, the game had endeared players with its promise of letting them wreak all manner of havoc in a quiet English village, as a goose of all things. It turns out the finished product was just as gratifying as we'd expected, and the game would go on to become an internet sensations as it managed to make its way into the mainstream media.

The Legend of Zelda: Link's Awakening

The second remake to be featured in my list of favorites, The Legend of Zelda: Link's Awakening was a beautifully-rendered top-down, action-adventure game developed by Greezo for the Nintendo Switch. Unlike the RE2 remake though, Link's Awakening was a faithful recreation of the original Game Boy game from 1993, for better or worse, shunning modern gameplay and quality of life improvements in favor of a more classic feel. It is also the second The Legend of Zelda game to be featured on my list, so I guess you could say this was a good year for Zelda fans.

It is hard to describe Sayonora Wild Hearts. I guess at its core you should say it was a visual album that also happened to be a rhythm game, "a pop album video game" as its developers, Simogo, would call it. But what perhaps sets it apart from anything else I can think of is its striking visuals and fast, ever-evolving gameplay that finds you riding a skateboard one second, then has you flying while fighting a giant, winged dragon the next. It also doesn't hurt that its music is actually quite good on its own terms, provided you are into some electronic pop that is.

There was clearly no shortage of first party, triple-A games on the Nintendo Switch in 2019. But of all the ones that were to be released this year, Luigi's Mansion 3 was the one that first caught my eye. Hands down, this is one of the best-looking games to grace the Nintendo Switch, and should stand as a benchmark to other developers for what can be done with the hardware. But going beyond the gorgeous visuals and fluid animations, the game is actually backed up by some very good gameplay which involves making your way through the multiple floors of a haunted hotel, each one with its own unique theme, while catching and battling some truly hilarious ghosts.

Of all the games on this list, I don't believe there was any whose release was more controversial than the new pair of mainline Pokémon games, Pokémon Sword and Shield. Following its first reveal and subsequent announcement that not all Pokémon from previous generations would be featured in its regional Pokédex, fans had expressed concerns that developers, Game Freak, were not giving the game the amount of polish and effort it deserved. Good thing the actually game turned out alright though, and of all the games on this list, it is the only one I am still actively playing. 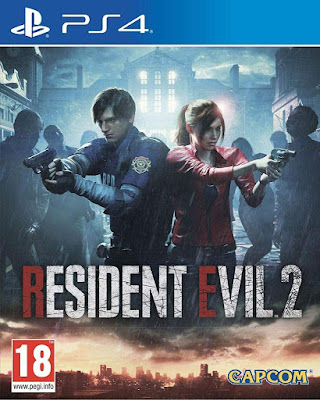 From the first moment I had stepped foot into the re-imagined halls of the Raccoon City Police Department, I could tell that RE2 Remake was going to be something special. This is beyond a doubt one of the best remakes of a video game ever made. Rather than just retell the same story from 1998, but in a fresh coat of paint, the game is a grounds-up re-imagining of the original that retains the same sense of dread while updating the formula with modern gameplay mechanics. Simply put, this is the new gold standard for all remakes going forward, and with Resident Evil 3 Remake coming in just a few short months, I guess it is high time I go get a new hard drive for my PS4.