I think we can all agree that Black Panther was one of the most eagerly anticipated films this past year, after the character's show-stealing debut in Captain America: Civil War two years before. The fact that it was to feature a predominantly black cast, and that it was being directed by Oscar-nominated director, Ryan Coogler, only served to heighten our expectations. And those expectations were more than met, propelling the movie to become one of the landmark cinema events of the year.

Nowadays, it is very rare to find a comedy that is not only funny, but also competently made from a technical and artistic standpoint. Game Night is just one such comedy. It stars Jason Bateman and Rachel McAdams as a competitive gaming couple who are invited to what is billed as the ultimate game night. But things take a dark turn when one of the participants is seemingly kidnapped as part of the game, and the only way to win the game is to follow the set of clues he'd left behind beforehand.

Real-life couple Emily Blunt and John Krasinki star in A Quiet Place, a post-apocalyptic horror film about a husband and wife trying to keep their family safe in a world ravaged by hellish creatures that hunt by sound. The film makes good on its titular promise with long stretches of silence with hardly any dialogue spoken. Yet it still manages to retain as much tension as you'd expect from a film of this nature.

Earth's mightiest heroes finally went toe to toe with Thanos this year, after 18 movies and as many post-credits scenes between them. And what a battle it was too, culminating in what would undoubtedly be remembered for years to come as one of the boldest and most heart wrenching endings to a superhero movie of this caliber. The story is not over yet though, so fans are looking forward to the release of Avengers: End Game next year for some much-needed closure.

The Avengers were not the only superheroes teaming up this past year, as the merc with a mouth was also putting together a team of his own. Known as the X-Force, his ragtag group of heroes would go on to provide more laughs than actual superheroics. Deadpool 2 builds upon the success of the first movie while also defining its place in the wider X-men cinematic universe, thereby setting itself up for more potential crossovers.

Wes Anderson returned to stop-motion animation this year for his latest film, Isle of Dogs. In a dystopian future where all dogs in the greater Japan area have been banished to an island that doubles as a dump, one boy would embark on a journey to find and bring his dog back home. It is a heartwarming tale that has Wes Anderson's signature visual flair, while also boasting the voice talent of an all-star cast that includes Bryan Cranston, Edward Norton, Bill Murray, Jeff Goldblum and Scarlet Johansson.

14 years. That's how long it has taken for fans of the beloved Incredibles to get this much-anticipated sequel. But the Incredibles themselves haven't aged a day since 2004, as the movie takes place immediately after the events of the previous one. Superheroes are still illegal, but Elastigirl joins forces with a brother and sister duo that want to put an end to that, leaving Mr. Incredible to take care of parenting duties. Incredibles 2 was a great, worthy sequel. Here's hoping it doesn't take another 14 years to get a follow-up.

Tom Cruise proves once again that he's still got the moves in Mission: Impossible - Fallout, the sixth installment in the long-running spy series. Christopher McQuarrie returns to direct, and the story picks off right where Rogue Nation left off, with the IMF agents left to deal with the aftermath of their takedown of the Syndicate terrorist network. The film is easily the best in the series, with some even considering it among the greatest action movies of all time.

Another long awaited sequel that was released into the wild this year was Wreck-It-Ralph 2. The movie has John C. Reilly reprising his role as the voice of the titular video game baddie turned goodie. He is joined by Sarah Silverman as the voice of his best friend, Vanellope von Schweetz, and the film finds the duo leaving the confines of the arcade to embark on an adventure on the internet, where they hope to find a replacement part for the Sugar Rush arcade game before it is "put to pasture."

Spider-Man: Into the Spider-Verse

Spider-Man: Into the Spider-Verse is the new benchmark for animated comic book movies, with its stunning visual style that looks like its been ripped straight out of the pages of a comic book. I can't overstate how stunning this movie looks. The fact that it also tells a great, heartfelt story, while still delivering the requisite amount of action just goes further to place it among the upper echelons of animated superhero movies, a space that is typically reserved for DC Comics adaptations. 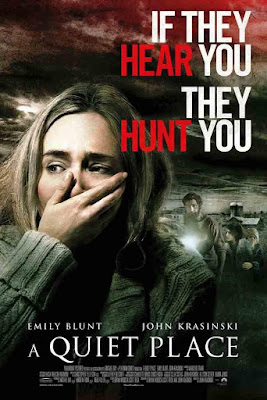 Yep. Called it. I'd known from the moment I finally saw A Quiet Place that it would be difficult for any other film to topple it off the top of my list of favorite movies this year. Not to say that they haven't been some serious contenders, with Mission: Impossible - Fallout and Spider-Man: Into the Spider-Verse being as awesome as they were. But there is just something about this movie that sets it above all others. No other movie had been able to tick all the boxes this year the way this one so effortlessly did. The 10 Cloverfield Lane comparisons are unavoidable for sure, but the fact that that was my 2016 favorite movie further cements this ones position as numero uno.
Posted by Michael Abayomi at 08:00