The Australian punk rockers that gave us "She Looks So Perfect" in 2014 were back this year with another hit that had instant classic written all over it. This time around, the band had decided to step out of their comfort zone by delivering an electropop powerhouse, showing just how much they have evolved since their punk rock debut.

Calvin Harris and Dua Lipa join forces on One Kiss, a song that is as much an ode to 90s house music as it is a showcase for both artists. Debuting at number 3 on the UK charts, the song would go on to top the charts for 8 consecutive weeks, becoming the first song featuring a female singer to do so in the past decade.

Arguably one of the best remixes released this past year, Jackie Chan finds DJs Tiësto and Dzeko putting their spin on the Preme and Post Malone collaboration. The result is a crossover hit that manages to celebrate the fast life while paying homage to the famous martial artist of the same name.

As I Lay Dying - My Own Grave

As I Lay Dying was back this year to straddle the line between mainstream metalcore and Christian Metal with their new single, My Own Grave. And they've never sounded better, with the song's lyrics being especially poignant when put in the context of their lead singer's recent incarceration and the events surrounding it.

Childish Gambino - This is America

Very few music videos managed to set the internet on fire this year the way This is America by Childish Gambino did, juxtaposing its graphic depiction of gun violence with its tightly choreographed dance moves. This has propelled the song to receive a total of 4 nominations at next year's Grammy Awards, including Song of the Year, Record of the Year, Best Rap/Sung Performance and Best Music Video.

Speaking of gun violence, one of the tragic tales that made the rounds on the internet this past year was that of America rapper, XXXTentacion, who was gunned down during what appeared to be a robbery. His death would go on to lend even more credence to his specific brand of emo-inspired hip hop, propelling his sophomore album's lead single, Sad!, to the top of the Billboard Hot 100 charts.

Disturbed - Are you ready

Disturbed was back this year to follow up on the recent mainstream crossover success they'd found following the release of their Simon & Garfunkel cover with a new album. For their first single though, they'd listened to long-time fans and decided to release Are You Ready, a song that is more in tune with their older, heavier sound. It would eventually top the Billboard Mainstream Rock Songs chart.

Bring Me the Horizon - Mantra

Another band that was back this past year was Bring Me the Horizon, following up on the success of their 2015 album, That's the Spirit, with the promise of a new one. And our first taste of that album came in the form of its first single, Mantra, a song that marked even more of a departure from their deathcore and metalcore sounds of old. But you won't catch fans complaining, not when their new music sounds as good as it does.

While She Sleeps - Anti-Social

While She Sleeps was one of several bands I discovered this past year through YouTube recommendations. In this case, the recommendation in question was for their recent collaboration with Oli Sykes of Bring Me the Horizon, Silence Speaks. I'd immediately gone to check out their back catalogue of music, and their brand of metalcore dubbed metallic hardcore. But it was not until they released their video for Anti-Social did I consider myself a fan of said music.

Burna Boy is an artist that's been going places, even scoring a guest appearance on the Fall Out Boy album, M A N I A, earlier this year. It was his collaboration with Major Lazer though, All My Life, that would eventually crowbar its way onto my year-end favorites playlist, with its feel good vibes and Burna Boy's signature vocal style.

While She Sleeps - Anti-Social 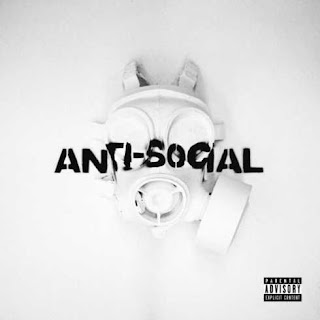 Once again, it was a tough call, but I'd have to give the title of my favorite song of 2018 to Anti-Social. It is one of those songs that comes out of left field and blows everything else you'd been listening to out of the water. Everything from its guitar opening, to its headbang-worthy intro, and the timeliness of its overall message sets it apart from other songs on this list. Add to that the fact that it boasts one of the most well-made music videos and what you've got is the total package, which is made all the more impressive when you consider that it was put together by an independent band. They'll be releasing their next album, So What?, next year, so here's hoping that this is just one of several gems to be found on that record.

PS: Merry Christmas everyone.
Posted by Michael Abayomi at 08:00