As we close out yet another year filled with awesome entertainment and moments high and low, it is time for me to take a step back from it all and review which of these left a lasting impression. So for the rest of the week, I'll be shortlisting my favorite things and moments from 2018. This is a feature I've been running on this blog since inception, so if you fancy catching up on my favorites from previous years, here are links to my favorites from 2017, 2016, 2015, 2014, 2013, 2012 and 2011.

2018 was a solid year for video games, so just like I did last year, I'll be starting the week-long series with a list of my favorite video games released during the year. I didn't get around to playing as many of the heavy hitters as I would have loved, so games like Monster Hunter World and Assassin's Creed Odyssey would be noticeably missing from my list. But the few games I did manage to play have been some of the very best to grace PCs and consoles in recent memory. And my favorites from those are:

Shadow of the Colossus

The fact that I never owned a PS2 meant I'd missed out on a lot of classics from that generation. And one of the most revered of these was Shadow of the Colossus, a game that was faithfully remade for the PS4 this past year. Best described as an action-adventure game made up of a number of sequential boss battles, the remake not only boasts one of the most breathtaking visuals on PS4, but also retains the same haunting atmosphere that made the original such a classic in the first place.

Another game that emerged during the PS2 generation was God of War. Based on the tale of a demigod named Kratos who was betrayed by the gods of Greek mythology, the game would go on to launch a series filled with blood, guts and revenge, the quest for which culminated in God of War 3 on the PS3. For the fourth installment, the developers decided to go with a soft reboot of the entire series. The game was heralded as a technical marvel, pushing the PS4 hardware to its limits while also reinvigorating the series with new gameplay mechanics and storytelling techniques.

Celeste is a side-scrolling platformer developed by indie game developer, Matt Makes Games. Much like Super Meat Boy, the game sports a pixel art style reminiscent of 2D platformers of old and is renowned for its gameplay's requirement of pixel-perfect jumps and dashes. What sets Celeste apart though is its surprisingly deep and rewarding storyline and a beautiful soundtrack that perfectly compliments its on-screen action.

Fortnite is undeniably the most popular video game in the world right now. Much of that popularity can be attributed to its simple pick-up-and-play battle royale gameplay, as well as its availability across multiple platforms and devices. Actually released for PCs in 2017, I am including it in my list of 2018 favorites primarily because this was the year it made its way onto consoles, or more specifically my current console of choice, the Nintendo Switch. I am yet to win a single match, or master its building mechanic for that matter, but the game finds other ways of dishing out rewards regardless.

There have been no shortage of roguelikes and metroidvanias in recent years, but rarely has both genres been blended as beautifully as they have in Dead Cells. Developed by Motion Twin, the game places players in control of the titular "dead cells" after they reanimate the corpse of a recently-executed prisoner, and their primary objective is escaping the dungeon they find themselves in, with its procedurally-generated levels and an upgrade system that rewards exploration and encourages subsequent retries.

The Messenger is a 2D action-platformer inspired by the Ninja Gaiden games of old. You play as the titular messenger, a ninja tasked with delivering an ancient scroll to the top of a mountain after your village is attacked by a demon horde. Players are able to double jump using a technique called cloudstepping, whenever they strike an object while in mid-air. But perhaps the game is best known for its time travel mechanic, with the past being presented in 8-bit graphics and the future in 16-bit, and appropriate chiptune music and sound effects for both eras.

Have you ever wondered what it would feel like to swing through the city of New York? Well, that's precisely what Insomniac Games have sought out to achieve with Marvel's Spider-Man, putting you in the shoes of everyone's favorite webslinger. The swinging mechanic is nothing short of exhilarating, and still manages to feel that way, even after hours of traversing its open world. And with a combat system that is reminiscent of the Batman: Arkham games, that feeling of exhilaration continues even when your feet finally hit the ground and you're faced with scores of bad guys to pummel.

The original Red Dead Redemption was considered one of the greatest games from last generation, with its incredible open world, gunplay, music and story. So of course expectations were high for its long-awaited sequel. The game is set several years before the events of the first game, and players control Arthur Morgan, an outlaw and member of the Van de Linde gang, as they fight to survive against lawmen, bounty hunters, rival gangs and the decline of their way of life in the face of civilization.

As popular as the Pokémon franchise has gotten over the years, I've never been more than a casual observer. The only entry in the series that I sunk any significant amount of time into was Pokémon Yellow on the Game Boy Color, nearly 20 odd years ago, and I never realized just how fondly I held that particular entry, until now. Pokémon Let's Go is a Nintendo Switch remake of Pokémon Yellow, with beautiful 3D visuals, a catching mechanic ripped straight out of the super popular Pokémon Go, and a surprisingly deep RPG progression system that is sure to satisfy even seasoned veterans.

Another series that I hadn't been particularly keen on over the years is Super Smash Bros. I suspect this was due to the fact that I hadn't owned a Nintendo console since the SNES, and the few times I'd played any of the games at my friend's place, I'd gotten my ass handed to me. But there is something about Super Smash Bros. Ultimate on Nintendo Switch that makes it so accessible to newbie's like myself. Couple that with its RPG-like single player adventure mode, World of Light, and I've found myself coming back to the game time and time again. The game is not only the "ultimate" edition of the series as it's been marketed, it is also a celebration of video gaming as a medium. 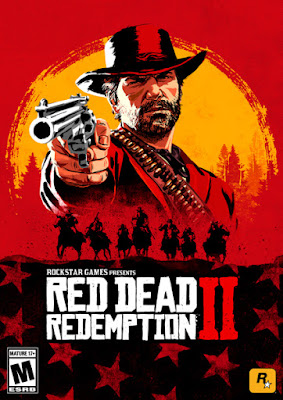 It was a tough call, but inasmuch as I loved playing both God of War and Marvel's Spider-Man this past year, my favorite game for 2018 is undoubtedly Red Dead Redemption II. It took everything Rockstar had done in the previous game, and GTA V after it, and shot it into the stratosphere. Its open world is so beautiful and dense with detail that I found myself spending huge chunks of time just admiring its various vistas. Its sound design and music is also one of the most immersive I've ever encountered in a video game. That said, the game isn't without its issues, with its comparatively slower pacing and outdated controls being the first that come to mind. But no other game this year had made me feel such emotional highs like the ones I'd felt while experiencing Arthur Morgan's tale of betrayal, revenge, and ultimately, redemption.