A woman on the run from her past wakes up following a car accident to find herself imprisoned in an underground bunker. That is the basic premise behind the pyschological thriller, 10 Cloverfield Lane, a movie that also serves as a spiritual successor to the 2008 found-footage monster film, Cloverfield. The movie stars Mary Elizabeth Winstead as the woman, and John Goodman as her abductor.

Ryan Reynold stars as the fourth-wall-breaking, potty-mouthed antihero with regenerative powers, Deadpool, a role he'd previously played in the X-Men misfire, X-Men Origins: Wolverine. Thankfully, his second stab at the character proved to be both critically and commercially successful, becoming the first superhero movie to earn a Best Picture Golden Globe nomination, as well as the highest-grossing R-rated movie of all time.

Zootopia is an animated film that tells the story of a small-town rabbit trying to make it as a police officer in the big city. She forms an unlikely alliance with a cunning red fox as they try to unravel the mystery behind the animals going "savage" in their city. The movie started Walt Disney's current winning streak, and it would eventually go on to earn over $1 billion dollars in the global box office..

The Walt Disney classic was remade for a new generation of kids this year, resulting in what is currently one of the most technically impressive movies to date. The movie features a breakout performance by Neel Sethi, who is supported by an ensemble cast of animals that include the voices of Ben Kingsley, Bill Murray, Idris Elba, Lupita Nyong'o, Scarlett Johansson and Christopher Walken.

The latest Captain America movie is frequently referred to as a mini Avengers movie, as our costumed heroes assembled on the big screen to face off against one another. The movie is best remembered for giving fans their first taste of Chadwick Boseman as Black Panther and Tom Holland as Spider-man, but should be equally lauded for telling a story that featured so many Marvel heroes without feeling too bloated or overstuffed.

Finding Dory is a sequel to the 2003 Pixar animated film, Finding Nemo. It tells the story of Dory, a blue tang with short-term memory loss, and her journey to find her long-lost parents. The movie currently holds the title of highest-grossing movie in North America for 2016, but might soon be forced to relinquish that honor to another Disney juggernaut further down my list of favorites.

Blake Lively gives a solid performance as a woman trapped by a shark in the survival horror film, The Shallows. The film was one of the sleeper hits this past summer, grossing several times its production budget during its theatrical run. Beautifully shot and about as tense as they come, the movie proved that even well-worn story lines can be quite effective when done right.

A home invasion story with a twist, Don't Breathe is a movie about three burglars who get more than what they bargained for when their latest mark, a blind man living in a deserted neighborhood, turns out to be more predator than prey. The film boasts some truly unique scares and enough unexpected twists to satisfy even the most jaded horror film fan.

Marvel expanded its cinematic universe into magical realms this past year with Doctor Strange, a movie about a skilled neurosurgeon who drops his scientific knowledge and embraces the mystic arts after a life-altering car accident. The movie works as a standalone story, but ultimately ties into the larger cinematic universe, hinting at greater things to come.

Rogue One: A Star Wars Story

I think it is safe to say that Rogue One: A Star Wars Story has turned out to be quite successful. Not only is it the current box office champion, but it is already well on its way to becoming the year's highest-grossing film in North America. The fact that the movie boasts a great cast, great action, and high production values overall definitely helps. But hey, this is Star Wars we're talking about here. Did anyone honestly think it would be anything but awesome!? 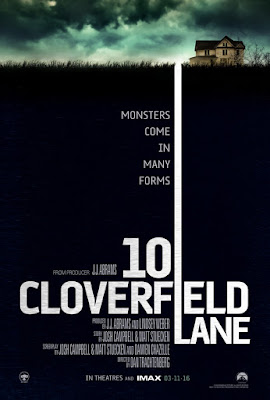 That's right, folks, my favorite movie for 2016 is 10 Cloverfield Lane. There is just something about this movie that sets it apart from others on this list. Perhaps it is its smaller scale, with the greater part of the movie taking place in an underground bunker. Or maybe it is that sense of mystery that permeates the whole film, with the audience left guessing even as more and more pieces of the puzzle are revealed. Overall, I think it is because it is superbly well-made, with events building up to what is easily the most wildly unexpected climax I'd seen all year.
Posted by Michael Abayomi at 09:00