The Origin of a Storyteller 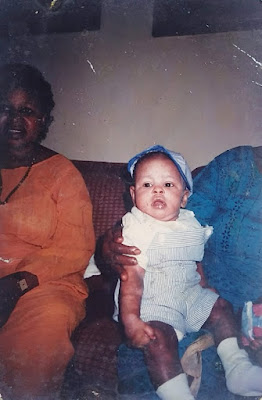 It all began in the summer of 1998. Well, actually, we don’t have summers over here in Nigeria. All we get is a dry and rainy season. But that’s beside the point. It was in 1998 that I made an all-important decision: I was going to write a book.

The point is I was going to write a book, which was going to be titled Nowhere Near Home, and it was about this teenage girl named Jessica, who gets stranded in a top-secret research facility, in the middle of the jungle, somewhere in Africa, many miles from home as the title suggests. And the best part was they (she and a few others just as unfortunate) were to be hunted down by a group of biologically-engineered super mutants.

Talk about a mess of ideas.

What possessed me to come up with any of this? I don’t know. But between playing games like Resident Evil, and watching movies like Starship Troopers, Mimic and Island of Dr. Monroe, I’d say the seed had been sown. Oh, yeah, I forgot to say that it was going to be excessively violent and bloody to boot.

Obviously, this little book of mine wasn’t meant to set the world on fire or anything. I wasn’t aspiring to be the next Michael Crichton or Stephen King. Heck, I didn’t even know who those people were at the time. Neither did I know it was possible to make a living telling such tales. Like I said, I hadn’t read any novels, plus I was just this kid with a rather convoluted idea for a book. What did I know?

So there I sat in front of my computer that summer (and here I go saying summer again. Michael, what is wrong with you?). It was a 486 running Windows 3.1, and I had to make do with Word 2.0. But it was more than enough to get the job done, and so I had invested many hours on it, writing my story. I even went into the trouble of doing some full-color illustrations too, with none other than Microsoft Paint.

Hey, what can I say? I was living a dream and having fun at the same time.

But alas, it wasn’t meant to be. During a much-needed upgrade to Windows 98, our system engineer, who wasn’t aware I had been busy writing the next Jurassic Park, had opted to format our meager 300MB of hard disk space. And so I had lost all my files, including my precious masterpiece. There’s a lesson to be learnt here, ladies and gentlemen. Can you tell what it is?

An event as monumental as losing your work-in-progress should have been enough to crush most aspiring writers. But not me. Like most kids my age though, I had initially gone back to doing what I do best: playing Tomb Raider, watching Cow and Chicken, and listening to Britney Spears. But the thing about dreams is that they never really go away. Still, it wasn’t until the summ – I mean, dry season of 2000 did I attempt rewriting my book, sans the illustrations.

I never got beyond the first 2-3 pages of this iteration though, and the one thing I remember from reading it several years later was how utterly cringe-worthy my writing was at the time. Thankfully, this too was lost following a hard disk failure, and a virus infestation amongst other things. There goes that lesson again. Spotted it yet?

Now, a lot of significant things happened over the course of the next few years. I had the hots for about a dozen different girls. I became a fan of Linkin Park. But most importantly, I started reading novels. Not just so I could manage a C for my literature class, but for the mere exhilaration of getting lost in a writer’s tale. And the book that opened my eyes was Harry Potter and the Sorcerer’s Stone.

It is almost impossible to resist the urge to say at this juncture all the things I loved about that book and others in the series. But I believe that would be better served in a future blog post. For now, all I would say is that no other book had sparked my imagination, with a believable world and an interesting cast of characters, like J.K. Rowling’s seminal title.

Since then, I have read several novels by authors like Isaac Asimov, Dan Brown and Michael Crichton. I’ve also discovered that a lot of the movies I enjoyed growing up had been adapted from novels. And 9 times out of 10, those adaptations were nowhere as brilliant as the books they’d been based upon. So it was all these things that made me realize that books were indeed the ultimate medium for storytelling.

I still love movies though, of which my favorite was 2003's The Lord of the Rings: The Return of the King, yet another adaptation. Another movie I absolutely loved that year was Quentin Tarantino’s Kill Bill: Vol. I. In fact, it was during the mandatory wait for Vol. II that I finally decided to once again rewrite my book (after seeing how cringe-worthy the previous draft was).

It was only during this third draft did I see any potential in my storytelling abilities, having learnt a thing or two about composition and building conflict. So I had written for the better part of a year, until my progression was halted when we moved to a new home (we’d been renting a duplex apartment for the past eight years).

At our new place, conditions weren’t exactly conducive to writing, especially during the first few months. First off, our electricity/power supply was very much epileptic, as is sadly the case in most of Nigeria. Secondly, the little power we did get was not strong enough to power my aging computer. This was why I started writing my stories down with good, old-fashioned pen and paper, before later typing it out on my computer, a habit I still adopt till this very day. So by the end of 2004, I had managed to write some 25,000 words. But the story itself was only 33% complete.

I was overwhelmed with schoolwork for the better part of 2005, having decided I wanted to learn how to program computers. It was also a year I spent writing music, composing more than 20 songs, all of which were inspired by either of two girlfriends I’d had at the time. I’d found some time for books too of course, though most of this was spent reading. I’d also started keeping a journal where I recorded ideas for prospective books.

2006 wasn’t much different, except I’d started keeping another journal. Here, I wrote about my day-to-day experiences at my new school. This I did in fulfillment of a fundamental principle I’d learnt about writing. To become a better writer, you need to keep writing. Constantly. No matter how trivial your subject matter might seem.

And so I did just that. I kept writing.

It was while watching TV though that I saw an ad for an upcoming episode of Law & Order. It was about some old, rich dude who wanted to be cryogenically frozen, until a day when science had overcome death. I never did see that episode, but that ad, and an article I’d read two years prior in a Nigerian magazine, had ignited an idea that would eventually result in the sci-fi novella, The Host.

I started writing The Host on the 21st of July, 2006 (my birthday by the way, hence why I remember the exact date), and was through before the end of the year. And whilst writing that, I saw the potential for both a prequel and correlations with another story I had written an outline for the year before. And thus The Mediator and The Second Rebellion were also born, the latter of which I wouldn’t complete until September 2008.

Flash forward to December 2011. I am now on the verge of e-publishing on Amazon. I am not pursuing this route solely to make a quick buck or two. To the contrary. My expectations have been set reasonably low. I am merely hoping to get some feedback, and to see if there’s any possibility of a future there. I’ve always been an advocate of technological advancements, and ereaders (and the ebook revolution) aren’t any different.

These are exciting times we’re living in. We have our iPads, 4G connections, social networks and whatnot, none of which was there when I started writing 13 years ago. I still listen to Britney Spears though, so I guess some things never change.
Posted by Michael Abayomi at 14:31