Let me start by conceding to the fact that I didn't watch nearly as much movies this year as I would have loved to. This is why I am limiting my choice of finalists to just 5 movies. It's not that they weren't that many good movies to choose from. It's just that most of the truly great ones (the Oscar-worthy ones) typically come out at the end of the year. And to include them in this list would be a disservice to the movies that had held us captivated over the months. That said, I'm sure you'll agree with at least some of my choices. So sit back, relax and let the rundown begin.

From the very moment I saw the trailer for Sucker Punch in August 2010, I could instantly tell this film could only go either of two ways. It could be utterly brilliant or piss poor. Well, majority seem to believe it falls in the latter category. But I feel they are simply missing the point here. This is a film that cannot be assessed on surface value alone. It is a work of art, something that could only be crafted by a skilled director like Zack Snyder. It tells a multilayered story where things are not as they appear. It also boasts some of the most spectacular action sequences seen all year. And while I would have preferred a less anticlimactic conclusion, I still feel the story in its present form more than achieved what it set out to do: to leave the audience dumbfounded, wondering what just happened. Hence the title.

This is one of those rare movies that turn out way better than you anticipated. I went into The Adjustment Bureau expecting to be mildly entertained at best, but came out just shy of blown away. This movie manages to tell a decent love story, without sacrificing any of its source material's otherworldliness. It is partially responsible for my current obsession with all-things Philip K. Dick, and I feel it is one of the better adaptations out there. Matt Damon and Emily Blunt also put forth decent performances as the star-crossed lovers.

I remember having an overwhelming desire to see this movie earlier this year. Looking back, I can't seem to remember where that desire came from. But I'm sure glad I listened to that desire. Otherwise, I might have missed one of the year's finer science fiction offerings. Reminiscent of the 1993 movie Groundhogs Day, Source Code tells the story of a man (Jake Gyllenhaal) who must relieve the same eight minutes of another man's memory, over and over again, until he finds a terrorist planning to detonate a dirty bomb, mere hours away. He is backed by the beautiful Vera Farmiga, and together they must try and foil the act of terrorism. Come to think about it, I think I now remember why I really wanted to see this movie. Two words: Vera Farmiga.

I still feel all warm inside just thinking about this movie. Quite simply one of the film-making triumphs of the year. With Super 8, J. J. Abrams proved that you could make a suspense-filled action roller-coaster of a movie centered around a bunch of kids. What really surprised me though was the level of emotional development between the characters. This should be attributed not only to the wonderful script, but to the superb job done by the actors themselves. There isn't a single weak character in this movie. The special effects were also top-notch, especially the spectacular train wreck sequence. The fact that the audience was kept guessing until the final minutes is also worth noting.

Coming straight off the path paved by the incredible Deathly Hallows Part I, Harry Potter and the Deathly Hallows Part II brings the franchise to a satisfying close. Even as a Potter fan who has never been satisfied by the movie adaptations, I could tell from the way Deathly Hallows Part I was handled that Part II was going to be hands down the best movie of the lot. After all, it was still just one single movie split in two. Well, not only was it the best of the lot, it was also one of the best movies of the year. Period. This movie reminded us of everything we loved about Harry Potter, whilst securing its place as the highest grossing movie franchise (well, at least until Avatar 2 and 3 get made and released). 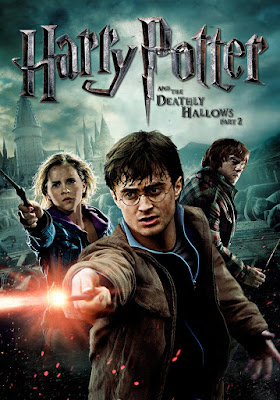 I admit that I was a wee bit skeptical when I'd found out the final book's adaptation was to be split into two separate movies. It sounded like a money making ploy to me; like Warner Bros. was trying to milk their Harry Potter license dry before moving on. Now I see how silly I was being. If only other movies in the franchise had gotten a similar treatment (With the exception of Order of the Phoenix. That book was just plain bloated to begin with).

I think the most remarkable achievement the Harry Potter movies have made is allowing us witness the cast members grow, not just as actors, but as individuals as well. I remember going "Holy Sh*t" when I saw young Daniel Radcliffe in the flashback sequence. And then in the final epilogue sequence, where they were made to look 17 years older (or closer to their actual ages, depending on how you look at it). Those were the moments that made us aware of the 10 years it took to make these movies.

This final movie is a well-realized adaptation that remains faithful to the book while taking some liberties. I like the fact that the spectacular duels weren't dampened by the good guys muttering disarming spells, when the bad guys were obviously using unforgivable curses, one of my little nitpicks with the final book.

All in all, the filmmakers and cast members gave the final effort their all, and the result is a movie as Oscar-worthy as anything else out now. This movie deserves a Best Picture nomination at the very least. And in this day and age of 10 available slots, there simply is no excuse.

Posted by Michael Abayomi at 10:43