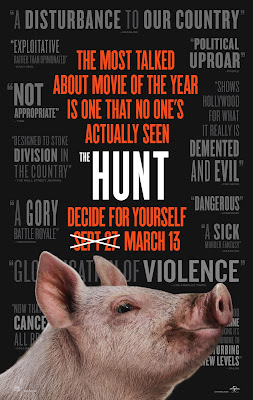 One of the silver linings of movie theaters shutting down in the wake of the coronavirus outbreak is the early availability of their current slate of movies on video-on-demand services. This includes recent releases like Onward, The Invisible Man and Birds of Prey, with others like The Gentleman, The Way Back and Bloodshot set to debut next week. While it sucks that these movies won't be getting full theatrical runs, at least the studios are able to cut their losses and capitalize on all the people at home looking for something new to watch.

This is the reason why I ended up watching The Hunt, a movie that hadn't even been on my radar and didn't look like it would be getting a theatrical release over here in Nigeria. And while it is not A Quiet Place Part II (which had been slated to come out this weekend before the coronavirus situation threw a wrench in those plans), I am glad that it is here to help tide us over until things go back to normal.

The film itself is a political satire presented as a horror/thriller/action/comedy hybrid, in which a group of 12 strangers wake up gagged in a deserted countryside known only as Manor House, where they are subsequently hunted for sport by some wealthy elites. It is eventually revealed that each one of them had been chosen as punishment for views they had expressed online via social media. But things take a turn when one of the hunted (Betty Gilpin) takes matters into her own hands and starts to fight back.

The Hunt works more as an action-comedy than as a political satire. It is excellently paced and driven by some solid performances, the key standouts being Betty Gilpin and Hilary Swank, the latter of which plays Athena, the villainous leader of the liberal elites. It is also genuinely funny, bordering on the very edge of slapstick, which I wasn't expecting but liked all the same.

I also appreciated the fact that the film takes shots at both liberals and conservatives, and basically every other group out there on the Twitterverse voicing their political and non-political views. Keep in mind that I don't actively follow American politics, so I don't have a side in those heated debates, which probably explains why I prefer this more well-rounded approach the filmmakers have taken.

While its over-the-top gore and violence might not be for everyone, The Hunt is a movie I can easily recommend to anyone looking for a good laugh and some cheap thrills, so check it out now if you didn't get a chance to catch it at the cinemas.
Posted by Michael Abayomi at 21:21