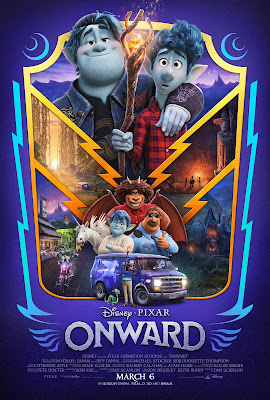 I am a sucker for advance screenings, so when I'd learnt that Disney and Pixar had elected to host advance screenings for their latest film, Onward, a full weekend before release, I was instantly sold. The film itself had been on my radar since trailers dropped for it last year, and Pixar being what it is, my expectations were indeed very high. So I'm pleased to say that the movie lived up to those expectations, even though it doesn't quite reach the heights of the greater films in its stable, not that it needed to.

The film takes place in an urban fantasy setting where mythical creatures had lost all knowledge of magic in favor of the conveniences of modern technology. It is the story of two elf brothers, Ian and Barley Lightbody (voiced by MCU alums Tom Holland and Chris Pratt), both of whom receive a gift from their late father on the former's 16th birthday. It comes in the form of a magical staff and spell that would bring back their father, but only for 24 hours.

Ian, who had never met their father before he'd died, performs the spell, except it doesn't go according to plan and it only brings back their father's bottom half. Now the two brothers must embark on a quest, along with their father's legs (as crazy as that sounds), to find a means to bring back their father's remaining half, before their 24 hours are up and Ian loses his chance to meet him forever.

Onward is both a coming-of-age film and road movie rolled into one, but one that is filled with so much charm and heart that you'd be left choked up by the end of it. Leave it to the writers at Pixar to hit you right in the feels. It might not hit you quite as hard as the likes of Up or Toy Story 3, but there was something deeply relatable in this particular film that elevated it to similar levels for me.

The animation in the movie is of course topnotch, so the fact does not need to be stressed. It's Pixar were talking about here, it comes with the territory. A Best Animated Feature nomination at next year's Oscars is pretty much a given already, but whether or not it would secure said nomination or ultimately win depends on how great or otherwise their next movie, Soul, turns out to be. Good thing we don't have to wait much longer than its June 19th release date to find out.
Posted by Michael Abayomi at 11:43