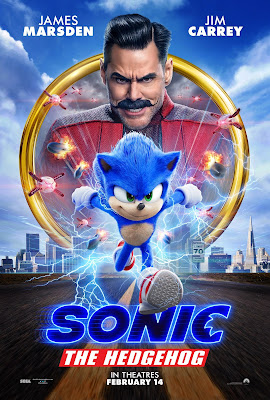 Video games rarely ever translate very well onto the big screen. This is why we've been left with duds like Super Mario Bros. and Alone in the Dark over the years. Even the more successful adaptations like Resident Evil and Tomb Raider are severely lacking in their story departments, relegating such movies to nothing more than mindless popcorn fare. So of course, my expectations were very much lowered going into Sonic the Hedgehog, which probably explains why I'd come out of it pleasantly surprised.

Based on the Sega video game series, the movie tells the story of the titular speedster (voiced by Ben Schwartz), who as it turns out is actually an alien that was forced off his homeworld and now lives in isolation in the sleepy town of Green Hills, Montana. Tired of living in loneliness, the blue hedgehog unknowingly lets off an energy signal while running laps in frustration at a baseball field. This prompts the US government to send in one of their top scientists, the nefarious Dr. Robotnik (Jim Carrey), to trace the source of the anomaly. Now Sonic must seek the help of the town Sheriff (James Marsden) in order to escape capture.

If you by any chance happen to follow movie news, then you must've heard about the backlash received by Paramount Studios following their reveal of the first trailer for Sonic the Hedgehog. The public outcry was so bad that the studio was forced to delay the film's release from its November 2019 release date to February 14th. This was to allow its animators enough time to completely redesign the title character, which looked nothing like the video game mascot its fans had grown up loving.

Well, it turns out that was a great move on the studio's part, because not only is Sonic the Hedgehog the current highest opening video game adaptation, it is also a pretty okay movie. Emphasis on the okay, since the film itself is geared towards kids and fans of the game, and doesn't try to do much to subvert or elevate itself from its source material. Not that it has to, since no one should be going into the movie expecting some high drama or a thought-provoking storyline. The main highlight in my opinion is Jim Carrey's take on the Sonic villian, Dr. Robotnik, a performance that harkens to his Ace Ventura days. The story is also quite serviceable and surprisingly heartfelt, which is more than we can say about the typical video game adaptation.

In case you haven't guessed it already, there is quite a bit of enjoyment to be had with Sonic the Hedgehog. It was fun and had a few genuine laugh-out-loud moments, and the theater full of kids I saw it with seemed to have enjoyed it quite a lot. It might not be one of the best films out there at the moment, but as far as video game adaptations go, the movie can be considered a somewhat decent one.
Posted by Michael Abayomi at 18:31