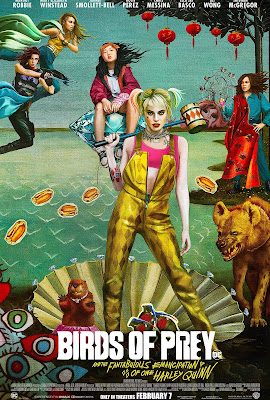 Anyone that saw the 2016 DCEU supervillain team-up movie, Suicide Squad, would remember that Margot Robbie had more or less stolen the show as Harley Quinn. So it came as no surprise when she was singled out to receive the standalone movie treatment. Fast forward some 4 years and that standalone movie finally arrives, but in the form of another supervillain team-up, Birds of Prey (and the Fantabulous Emancipation of one Harley Quinn).

After a very emotional breakup with the Gotham City Clown Prince of Crime (that is, Jared Leto's Joker for those of you keeping track), Harley Quinn begins the painful process of moving on with her life, and she does this by destroying the place where she'd proven her allegiance to the Joker, Ace Chemicals, and adopting a pet Hyena she names Bruce Wayne. The former act however signals to the city's criminal underground that the power couple were no longer together, which prompts all of the criminals she had wronged in the past to start coming after her.

This includes Roman Sionis (Ewan McGregor), a very eccentric criminal boss with a tendency to peel off the faces of his enemies. But when a precious diamond in the possession of his personal enforcer, Victor Zsasz (Chris Messina), gets stolen by a young girl named Cassandra Cain (Ella Jay Basco), Harley convinces them to let her help them retrieve the diamond. Roman agrees and gives her 24 hours to do so, but to make things interesting, he also puts out a half-a-million-dollars bounty on the girl, prompting other criminals to come into the fray.

The DCEU has had some significant success of recent with movies like Wonder Woman, Aquaman and Shazam, and I am pleased to report that Birds of Prey is already poised to continue that winning streak. It is hands-down one of the most violent comic book movies we have gotten till date, wearing its R-rating on its sleeve. It also fully embraces what made Harley Quinn so great in Suicide Squad, and runs with it. The fact that it has some of the most eye-popping and straight-up bonkers action sequences this side of John Wick is just another achievement.

Birds of Prey is the Suicide Squad we should have gotten in 2016. But unlike that movie that was all style but with very little substance, it starts with a promise of delivering a quirky comic book movie like none before, and manages to follow through and stick the landing. It is that rare film where the trailers were nowhere as good as the actual movie itself. This is probably why I had gone into it with some cautious optimism, and I came out of it pleasantly surprised as a result.
Posted by Michael Abayomi at 06:07