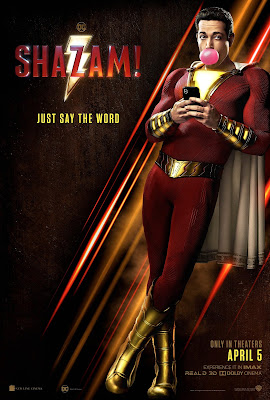 The DC Extended Universe (DCEU) continues its ongoing winning streak with Shazam!, the seventh film in its shared universe of movies based on DC Comics superheroes. Directed by David F. Sandberg (Lights Out, Annabelle: Creation), the movie serves as further proof that comic book adaptations do not always need to attempt to be anything more than standard popcorn fare, as it sheds all traces of the dark and somber tone that plagued earlier DCEU entries.

Separated from his mother at a young age, 15-year-old Billy Batson (Asher Angel) has spent most of his childhood bouncing from one foster home to another. He is eventually taken in by the Vasquezs, a couple that is already raising a family of 5 foster kids. This includes Freddie (Jack Dylan Grazer), a paraplegic boy who tries to befriend Billy. Except Billy isn't ready to accept the new family as his own, holding on to the belief that he might still be reunited with his real mother someday.

Billy is forced to stand up for Freddie one day, fighting off a pair of bullies before being pursued by them into a nearby subway. He manages to escape via one of its trains, but he is transported to a magical underground chamber called the Rock of Eternity, where he meets the wizard, Shazam (Djimon Hounsou). The wizard informs him that he has been chosen as champion due to the purity of his heart, and subsequently grants him superpowers which transform him to an adult version of himself (Zachery Levi).

Following his transformation into the titular superhero, Billy and Freddie do what any pair of teenage boys would do in that situation: they go to a supermarket and buy some booze. And it is from this point onward that the movie truly excels, as the boys proceed to test and document the full extent of Billy's powers, to increasingly comical results. But the boys soon find out that it isn't all fun and games when Billy is challenged by Dr. Thaddeus Sivana (Mark Strong), a man that was also granted superpowers by magical forces and now wants Billy's for himself.

Watching Shazam!, it is almost hard to believe that the movie exists in the same shared universe as Batman v. Superman. But unlike those earlier movies in the DCEU, the film is not burdened by the task of building a shared universe for these characters to inhabit, and presenting that universe through the lens of a singular vision. This allows it to fully embrace what made comic books such great fodder for kids and geeks in the first place. It serves up the laughs and playful spectacle in equal measure, resulting in what is hands down the DCEU's most fun movie till date.
Posted by Michael Abayomi at 10:00