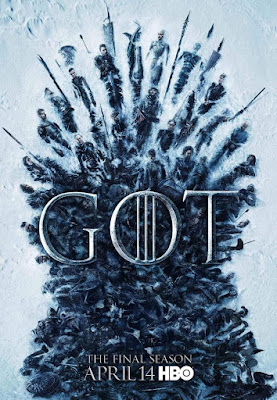 Game of Thrones is arguably the biggest TV show in the history of television, and it returned to TV screens and streaming devices all over the world earlier this week for its eighth and final season. The anticipation leading up to this season was huge, so it comes as no surprise that the first episode would break records. I mean, it's been close to two years since the last season and winter is finally here.

As fate would have it, I'd been thinking of starting a podcast for quite some time now, but never really felt I had everything I needed to make sure it was produced at the level where I felt it needed to be. But I've thrown all caution to the wind, and channeled my love for Game of Thrones to bring that dream to fruition.

Below is a link to the first episode of our as-yet-untitled film and TV discussion podcast, where we hope to share our thoughts on the latest films and TV shows.

For this episode, I'd sat down with Prince from The Drunk Pen; you should totally check out his review of the Season 8 premiere as it offers a nice recap of the entire episode. The current plan is for us to have a new episode of our Game of Thrones discussions uploaded to SoundCloud every week, sometime after the new episode airs. And this will continue until the series finale comes along. Thereafter? Who knows. But watch this space all the same.

This is all new for us like I said, so feel free to let us know what you think in the comments section below or over at SoundCloud. And of course, if you happen to dig it, do not hesitate to give us a like and share with your friends.
Posted by Michael Abayomi at 11:43