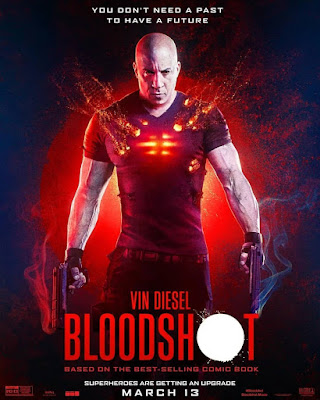 And of course, I am a big advocate for the occasional guilty pleasure here and there. I mean, every film can't hit the highest levels of pure escapism, or be the next Citizen Kane. So yeah, I was willing to give Bloodshot a shot (no pun intended). Heck, I was even prepared to brave going to the cinema (which have now all been shutdown by the way), before I'd learnt it was due out on VOD.

So I figured I'd wait for that instead, and boy am I glad I did.

The film stars Vin Diesel, who plays Ray Garrison, a U.S. marine who is killed and brought back to life as a nearly-indestructible super solider. This was done by a Dr. Emil Harting (Guy Pearce), whose company was able to bring him back by replacing his blood with nanobots. Waking up with no memory of his life before death, Ray is introduced to his new team, which consists of ex-soldiers that have been enhanced with various cybernetic augmentations.

But while spending time over drinks with one of his teammates (Eiza González), Ray starts to have flashes of his past life, discovering that he had been murdered along with his wife, as well as the name and face of the man responsible for the act. Consumed by a need to exact his vengeance, he sets off to kill that man, except what he finds at the end of the trail is a conspiracy that runs deeper than he could've imagined.

Bloodshot feels like a sort of throwback to a bygone era of action films, where CGI body doubles and stylized slow-motion action scenes were all the rage. I can totally see my teenage self grinning from ear to ear watching this. Except the movie didn't come out in 2003, and without the rose-colored lenses of nostalgia to garner it any favors, it quickly becomes apparent for what it is: a sub-par, B-grade action film. Worthy of serving as a mild distraction, both not worth much else.

That said, the movie does offer Vin Diesel fans precisely what they want, namely Vin Diesel playing what is effectively the same role he has spent his entire career playing now. Not that we are complaining, but still. So if you are a fan, then it is definitely worth checking out.
Posted by Michael Abayomi at 22:02