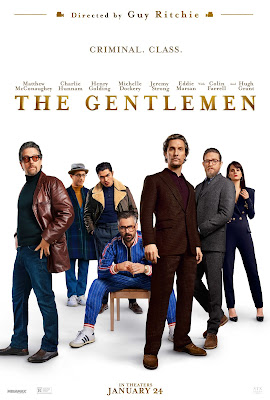 Guy Ritchie is one of those directors whose work is instantly recognizable, with his dark humor, scattershot dialogue, fast cuts and frenetic pacing all serving to define his signature style. These were all on show in his Sherlock Holmes movies, as well as the two classic crime comedy films with which he rose to fame, Lock,Stock and Two Smoking Barrels and Snatch. The Gentlemen has more in common with those earlier films, and as such serves as a return to form.

In the film, a private investigator named Fletcher (Hugh Grant) attempts to blackmail Raymond Smith (Charlie Hunnam), the right hand man of a drug baron, Mickey (Matthew McConaughey). He does this through an elaborate screenplay he has written about his findings about the drug baron's activities, information for which he is demanding £20 million. Much of the movie finds the pair going over the events of that screenplay, with Fletcher proving to be an unreliable narrator, and the viewer left to separate fact from fiction.

Mickey apparently wants to get out of the drug business, and in order to do so, he is seeking to sell his hard-won cannabis empire to American billionaire, Matthew Berger (Jeremy Strong), for the sum total of $400 million. But word soon gets out that he is trying to leave the business, which prompts interest from Dry Eye (Henry Golding), a rival buyer from a Chinese gang. Except both men fail to come to an agreement. What ensues after is a series of misunderstandings and unfortunate events, as Mickey tries to prevent the sale of his empire from falling through, while trying to prevent a full-blown turf war at the same time.

The Gentlemen is a Guy Ritchie movie through and through, and I was indeed hooked from the very first frame of its stylish opening sequence. Everything from its pacing, to its profanity-laden dialogue, and its soundtrack, just works. The film is driven by awesome performances across the board, with Charlie Hunnam proving to be a more than capable lead, and Collin Farrel all but stealing the show. I don't believe I've laughed as hard as I did here since watching Snatch all those years ago.

To think that I had been robbed of the opportunity to see this gem of a movie on the big screen. Shame on our local movie exhibitors for failing to show this in our theaters during its global theatrical run. Regardless of how I had eventually watched it, the movie itself is still a bloody brilliant piece of fine entertainment and it easily earns its place as one of my favorite movies of 2020.
Posted by Michael Abayomi at 21:25