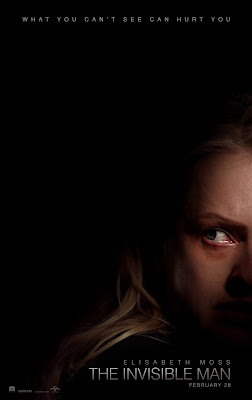 Horror films haven't exactly been having a swell 2020, with releases like The Grudge and The Turning all managing to fall short of critical and financial expectations. So it is something of a relief that the genre has scored its first bona fide hit this year in the shape of The Invisible Man, a modern retelling of the classic H.G. Wells novel. Originally planned as part of the short-lived Universal Monsters connected universe, those plans were put on hold following the lukewarm receptions of both Dracula Untold and the 2017 reboot of The Mummy.

Directed by Leigh Wharnell, the film puts a spin on its source material by choosing not to focus on the titular villain, but one of his victims instead. Her name is Cecillia Cass (Elizabeth Moss), and right from the opening scene of the movie, it is clear that she is terrified as she executes her escape from what is clearly an abusive relationship. Two weeks after her escape, she is given the news that her ex-boyfriend and abuser (Oliver Jackson-Cohen) has committed suicide. But instead of giving her the closure she needed to rebuild her life, she still feels haunted by all the trauma she'd had to endure.

But things begin to take a decidedly darker turn when she discovers that he is haunting more than just her thoughts, and she becomes convinced that he had faked his own death and somehow found the ability to turn invisible, just so that he could continue to torment her after her escape. Now she must struggle to convince the people dearest to her that she is not going insane, even as the titular villain's tactics become increasingly violent and impossible to ignore.

It is a good thing The Invisible Man was approached as a standalone movie, because it works beautifully in its current iteration. The movie starts off strong from its very first scene, and despite a relatively slow-burn opening act, it manages to keep that tension going right through to the end. There is a constant push and pull between what is real and what might merely be misconstrued as real, and Elizabeth Moss does a fantastic job of bringing that gradual descent into perceived insanity to life.

The movie is also genuinely scary, in spite of the fact that it takes a more sci-fi-inspired approach than your typical horror film. Most of that works largely because of the movie's smart cinematography and score, both of which work together to make the invisible man's presence felt in every scene he is in, despite not being visible to naked eye. These are elements that seemed to have been carried over from Leigh Wharnell's previous effort, Upgrade, and they work just as effectively here as they had there.

The Invisible Man should stand as an example of what can be achieved with a smartly written script and a unique take on an existing property. The fact that it was made with a shoe-string budget of $7 million is an accomplishment in its own right. It is a film I would easily recommend to horror fans, and it should be more than enough to tide them over until A Quiet Place Part II releases later this month.
Posted by Michael Abayomi at 17:12