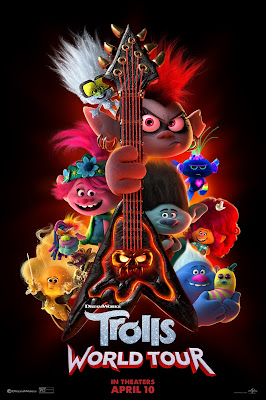 With most of the world's theaters still on lockdown due to the coronavirus, more movie studios are looking to streaming services for distribution of their movies. The latest one to be given that treatment is Trolls World Tour, the sequel to the 2016 animated musical, Trolls. The movie lands on video-on-demand platforms today, although this is coming after Universal had already tested the waters by releasing both The Invisible Man and The Hunt, after their truncated theatrical runs. But unlike those movies, this one is receiving what it is calling a day-and-date release with theaters.

The new movie finds Justin Timberlake and Anna Kendrick reprising their voice over roles as Branch and Queen Poppy respectively, two trolls that share a love for pop music and have grown to become best of friends. But as it turns out, Branch is seeking to be more than friends with Poppy, but can't seem to find the right words or time to express his feelings. All of that is put on the backburner though after they receive an unexpected letter from a neighboring troll kingdom.

As it turns out, the trolls once lived under the harmony of a six-stringed harp. But over time, they started to fight amongst themselves over what type of music should be played with those strings. This eventually led to the harp being destroyed and its six strings being used to form six troll kingdoms, each based on a different style of music: Classical, Country, Funk, Rock, Techno and Pop. Now, Queen Barb (Rachel Bloom) of the Rock Kingdom is seeking to aggressively reunite all six troll kingdoms as "one nation under rock," and it is up to Branch and Poppy to stop her.

I was never really a big fan of the first Trolls movie and I had quite frankly forgotten it existed until Universal had announced its sequel would be going straight to VOD. The one thing I remembered enjoying from the first movie though was its music, which included the Academy Award nominated song by Justin Timberlake, "Cant Stop the Feeling." The new movie might not have the benefit of any such instant standouts, but it does benefit from incorporating so many different musical styles into its song catalogue.

The story itself is fairly predictable, but heartwarming nonetheless. It is a story about embracing our differences as individuals, and one that I found particularly poignant in this day and age of social distancing we find ourselves in. Perhaps this is why Universal had pushed to have it released on VOD rather than delay it till theaters reopened, because of the timeliness of its message.

The theater owners were not too pleased by their decision to forgo a theatrical release though, and have in fact promised not to forget this particular incident, although it remains to be seen what form their retaliation might take.

Trolls World Tour is definitely worth the watch while you're at home and in need of something to entertain yourself or the entire family. It is filled with so many sing-along tunes that you'll be hard pressed to sit still as you resist the temptation to join in or dance. I really hope it recoups a good portion of its production budget on VOD and streaming, so that we can continue to get more movies dropped directly on those platforms while everyone is stuck at home.
Posted by Michael Abayomi at 15:56