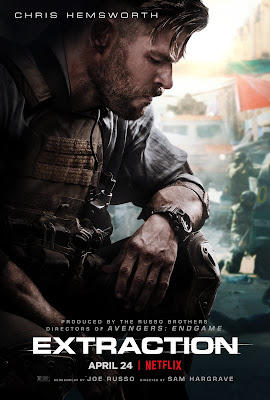 We're officially in the summer movie season. But with movie theaters still on lockdown, film fans are forced to look elsewhere for their blockbuster fix. And by elsewhere, I am of course referring to the offerings on video-on-demand and streaming giants like Netflix. Which is where Extraction comes in, their latest ultra-violent action thriller that owes a lot to B-movies of days past and the stellar stunts of more modern action movies like John Wick.

Written by Joe Russo and serving as the directorial debut of frequent collaborator and stunt coordinator, Sam Hargrave, the film stars Chris Hemsworth as Tyler Rake, a black market mercenary who is hired to extract the son of a powerful drug baron, after the boy, Ovi, is kidnapped by members of a rival gang. But of course, things don't go according to plan, and what follows are a series of double crosses and increasingly-audacious action set-pieces.

And speaking of action, Extraction has some of the most impressive stunt work I have seen since The Raid. There was this one scene in its first half in particular, which had everything from tightly-choreographed hand-to-hand combat to some truly insane camera work and editing. But incredible action and a slick presentation does not a great movie make, which is kinda where Extraction falters as a whole.

The movie can't quite shake off that "been there, done that" feeling it gives you, right from its opening shot which has Chris Hemsworth making a last stand on a bridge strewn with smouldering cars. And while he does what he can with the material he is given, none of that helps to hide what is effectively a film that relies a little too much on style over substance.

There appears to be this gulf between Netflix Originals. On the one hand, they've produced high-caliber awards movies like The Irishman, Marriage Story and The Two Popes. On the other hand, we have low-brow action movies like Bright and 6 Underground. Extraction clearly belongs in the latter category, but considering just how slim the pickings are right now, I'll say it is still definitely worth the watch.
Posted by Michael Abayomi at 14:58