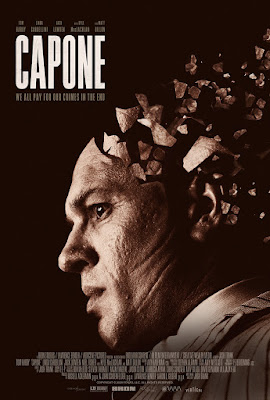 Josh Trank makes his return to the director's chair with Capone, a biographical crime drama about the gangster also known as Scarface. This is following the director's previous effort, Fantastic Four, a movie that is universally considered one of the biggest disappointments in the realm of comic-book movies. The newer film is just the latest in a string of mid-tier movies to be receiving a premium VOD release, in lieu of movie theaters being closed, so of course I was going to check it out.

Tom Hardy stars as the titular gangster, a man that had spent the better part of his life building an empire through his involvement in the then-illegal liquor trade. But rather than set the film in his heydays of crime and violence, the film hones in on his final year of life. It was a time after which he had been sentenced to 11 years in prison for tax invasion. With his finances dwindling, and his health and mental state gradually deteriorating as he succumbed to dementia, Al Capone is released after just 7 years of incarceration and allowed to live out his days in the comfort of his estate.

Except he isn't exactly free though. He is not only being watched closely by the government, who are hoping that he would reveal the whereabouts of the $10 million he had stashed somewhere he can no longer remember, but he is also being haunted by the demons of his past. All this would feed into his paranoia and the movie explores his decent into madness in cringe-worthy detail.

Capone is a difficult film to watch, no doubt, but this has less to do with the subject matter and more to do with the muddled execution the overall film has received. In an attempt to mirror the troubled state of mind of its protagonist, the movie doesn't really make much effort in marking out what is real or merely imagined, making the film somewhat hard to follow by less discerning viewers. But at least it is anchored by a very impressive performance by Tom Hardy.

So then, the movie can be viewed as a character study, one that explores the plight of a cunning man struggling to keep his grasp of reality. Except it doesn't really offer any insight into that man's psyche, at least not in the same way that movies like The Theory of Everything managed to do. And unlike The Passion of Christ which also focused on the final moments of its main character, there really isn't much happening here to justify choosing that time period as focus for a character study.

Capone is far from the return to form by Josh Trank that many were hoping for. But with just three movies under his belt so far, including the beloved found-footage/superhero movie hybrid, Chronicle, there is still some hope that he would manage to score the kind of home run we all know he is capable of.
Posted by Michael Abayomi at 11:56