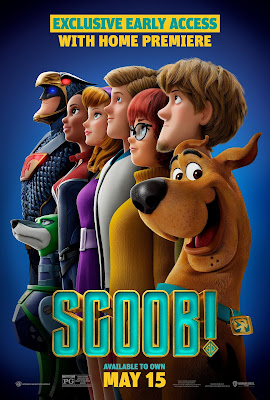 Till today, I still harbor fond memories of the first time I'd stumbled across Cartoon Network, a TV station that was devoted to showing nothing but cartoons. A first of its kind back in the day, the channel would show back-to-back classics from the Hanna-Barbera stable, shows likes The Flintstones, Tom and Jerry, and Looney Tunes, just to name a few. And of all the shows that was on heavy rotation during the station's inception, Scooby-Doo, Where are You! was easily one of my favorites.

So yeah, I was mildly intrigued when I'd learnt that Warner Animation Group, the studio behind The Lego Movie and its various spinoffs, was making a new Scooby-Doo movie. Originally slated for a theatrical release, the film joins the likes of Trolls World Tour as yet another animated film being put directly on video-on-demand (VOD) in the wake of the coronavirus pandemic and the closure of movie theaters around the world.

Serving as both an origin story and a new chapter in their adventures, the movie finds the Scooby gang members (Fred, Daphne, Velma, Shaggy and Scooby-Doo) teaming up with the Blue Falcon and Dog Wonder in a bid to stop Dick Dastardly and his nefarious plot to unleash the ancient Egyptian guard dog, Cerberus, upon the world, with other classic Hanna-Barbera characters like Captain Caveman also making an appearance. Because, why not?

It's hard to imagine any scenario where Scoob! would have found any kind of success in theaters. This is a movie that seems almost tailored made for a direct-to-streaming and VOD release, with its uninspired screenplay and barely funny jokes. The voice acting isn't particularly great either, despite employing the voice talents of Zac Efron, Amanda Seyfriend and Jason Isaacs.

On the plus side, the animation is at least pleasing to look at, as it manages to replicate the look and feel of the original animated series, while still looking modern enough to not look out of place or dated beside the animated films being churned out by other animation studios. But without a worthwhile story or plot to keep audiences engaged, none of that matters.

The end result is a movie that is nothing more than a weak attempt to recapture some of the mystery and wonder that made the original Scooby-Doo cartoon show a hit back when it was still okay to go outside and play in the dirt. As such, it is hard to recommend Scoob! to anyone but the most diehard of fans looking to revisit their childhood in these uncertain days that we find ourselves in.
Posted by Michael Abayomi at 20:00