It's that time again apparently, when I rundown my favorite things from the past year. It's a little something I've been doing on my blog since I started blogging, and those of you interested in seeing what it was like in 2014, 2013, 2012 and 2011 can find out by clicking on those links. This year's series, like previous years, would run all through the week, so be sure to come back everyday for more of the good stuff.

Right. Today, I'll be starting with a list of my favorite TV shows. I don't watch that much TV to say the truth. Okay, scratch that, I don't watch any TV at all. But thanks to the convenience of computers and the internet, I am still able to follow some of the more popular shows out there. And here are a few of my favorites for the past year.

2015 was a good year for Game of Thrones fans. Not only did we get a fifth season of the popular HBO show, we also got the video game series by Telltale Games, with five of its six episodes spread throughout the year. And while we are yet to get the long-awaited sixth book in the series, we are at least rest assured that the story would move forward come next year, since the show has finally caught up with its source material.

From the makers of Breaking Bad come this better-than-average spinoff of the highly-acclaimed show. It centers upon the transformation of struggling lawyer, Jimmy McGall, into the titular character, Saul Goodman, whose seedy practice Breaking Bad fans are already familiar with. The best thing about the show is that it not only serves as a prequel to Breaking Bad, but still succeeds as a stand-alone show.

The Marvel Cinematic Universe (MCU) has spawned quite a number of successful movies and TV shows, from Avengers to the Agents of Shield. But until the introduction of Daredevil earlier this year, none of those properties had pushed the boundaries in terms of the depiction of violence and other mature themes. Unlike the 2003 movie which was heavily panned by critics, this is clearly not family-oriented entertainment. But with high production values and arguably the best villian in the entire MCU, Daredevil has raised the bar for superhero-themed shows.

For some reason, I had totally failed to watch the 1996 Coen Brother's movie, Fargo. This changed of course earlier this year, after I'd binged the entire first season of the TV show inspired by events of the movie. And much like the movie before it, the series was packed with quirky characters whose mundane lives were quickly spiraling out of control. The second season just wrapped up last week, and it was even better than the first one, a feat considering how well-received season one had been.

Once upon a time, I used to be scared s**tless by the 1981 movie, Evil Dead. So much so that I never bothered to give any of the sequels a chance. It wasn't until I'd seen the 2013 remake did I decide to give the franchise another try, and it was only then that I discovered its unique blend of comedy and horror. The TV show, Ash vs. Evil Dead, perfectly captures that blend, finding that perfect balance between gratuitous bloodshed and side-splitting jokes.

The Man in the High Castle

Based on the alternative history novel of the same name by Philip K. Dick, The Man in the High Castle is an Amazon original series that explores a dystopian version of 1960s America, one where the axis powers won World War II, and the United States has been conquered by the Japanese and Nazis. The first thing that grips you about the series is the high production values. But ultimately it is the struggle of the resistance movement that draws you in, whose cause hinges on the successful distribution of certain film reels made by the titular man in the high castle. 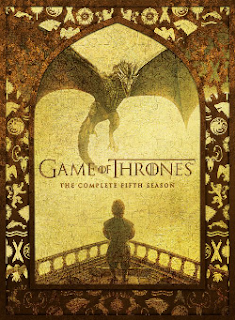 While it can be argued that the latest season of Game of Thrones had quite a few missteps, there is no denying the overall satisfaction the season brought to fans. Much of that satisfaction can be attributed to Episode 8, Hardhome, during which we got to witness the first full-on battle with the white walkers. The payoff from that episode alone more than compensates for the slower opening episodes. It's a shame (Get it? Shame!?) the season had to come to an end shortly thereafter, and in such a manner so gut-wrenching. Season 6 can't come soon enough.
Posted by Michael Abayomi at 09:00