Spider-Man: Into the Spider-Verse (Movie Review) 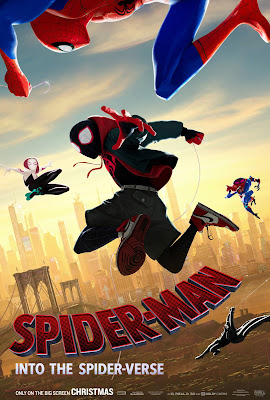 What a time to be a Spider-Man fan; not only did we get another stirring (and ultimately heartbreaking) take on the webhead by Tom Holland in Avengers: Infinity War earlier this summer, but we also received what was arguably one of the greatest superhero video games ever made in the form of Insomniac's Marvel Spider-Man in the fall. Now we are crowning out the year with Spider-Man: Into the Spider-Verse, a movie that features not one, but six different incarnations of the beloved webslinger.

The movie centers on Miles Morales (voiced by Shameik Moore), a teenage boy who is struggling to adjust to life at his new boarding school. But his world is turned upside down, quite literally, when he is bitten by a radioactive spider that imbues him with spiderlike abilities. He is soon forced to put those new abilities to the test when he is caught in the middle of a fatal fight between Spider-Man (Chris Pine) and his long-time enemy, the Kingpin (Liev Schreiber). In a bid to bring back his dead wife and daughter, the Kingpin and his scientists use a particle accelerator to momentarily open a doorway to other parallel universes.

Unbeknownst to them, this has the unintended effect of transporting the various Spider-Men of those universes into their own. These include the junk food loving Peter B. Parker/Spider-Man (Jake Johnson), Gwen Stacy/Spider-Woman (Hailee Steinfield), Spider-Man Noir (Nicolas Cage), Peter Porker/Spider-Ham (John Mulaney), and the anime-inspired Peni Parker (Kimiko Glen), who co-pilots the biomechanical suit, SP//dr, with her pet radioactive spider. The Spider-Men must work together with Miles to defeat the Kingpin, and restore order to the titular Spider-Verse before it is destroyed.

It is hard to talk about Spider-Man: Into the Spider-Verse without first addressing the sheer gorgeousness of its visuals. The movie sports a distinct art style that lies somewhere between CGI and hand-drawn. This is lent further authenticity by its stop-motion-like animation, with frames being skipped and sped up to mesmerizing effect. Put simply, it is like watching a comic book brought to glorious life, and I found myself simply gushing at the stylized visuals for the better part of the movie's runtime.

The movie isn't all about its looks though; it also boasts a story that is packed with superhero action, not afraid to go to some dark places, and is extremely funny to boot. I was surprised by just how comedic the situations could get, especially with the likes of Spider-Ham, the Looney Tunes-inspired rendition of Spider-Man who comes complete with anvil-dropping antics. Thankfully, none of it gets too overbearing, a true testament to the balancing skills of the writing and production teams, which include Phil Lord and Christopher Miller of The LEGO Movie fame.

I know I'd declared Ralph Breaks the Internet as my clear frontrunner in my last review, but Spider-Man: Into the Spider-Verse also deserves a shot at the Best Animated Feature award at next year's Oscars, if only because it looks unlike anything we've ever seen before. It is also high time that another animated film that wasn't churned out of the Disney and Pixar animation studios took home the award. So, who knows? A fan can hope at the very least.
Posted by Michael Abayomi at 07:27