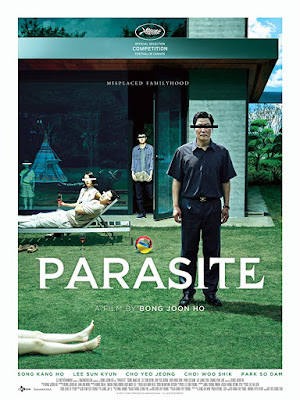 Anyone who's been following my annual Year in Review series of posts long enough might remember that I had named Snowpiercer my favorite movie for 2014. There was just so much to love about that movie, from its mind-bending tale of the last surviving remnants of the human race being confined to an unstoppable train encircling the globe, to the way the inhabitants of the titular train were segregated according to class. It was a visually-striking action movie that proved that South Korean director Bong Joon-ho was nothing short of a visionary. And that vision is once again on full display in Parasite, a dark comedy he'd also co-written.

The film explores classism, a recurring theme in several of his works. But this time around, he does so through the lenses of two families living on opposite sides of the great economic divide in South Korea: the first are the Kims, a family of four living in a basement apartment in a rundown neighborhood, and the second are the Parks, another family of four living in a lavish mansion. The lives of both families intersect when the Kims' son, Ki-woo, gets a job as an English tutor for the Parks' daughter, Da-hye, after he is recommended by his good friend and former tutor, Min-hyuk.

Discovering that the Parks were also in search of an art tutor for their son, Da-song, Ki-woo manages to convince (read: con) the extremely gullible Mrs. Park into hiring his sister, Ki-jeong. And using similar underhanded tactics, the Kim children also secure jobs for both their parents with the wealthy family, to the detriment of the people formerly holding those jobs (like the titular Parasite). While the Parks are on a camping trip with their son, the Kims use the opportunity to take up full residence in their house. But things change one rainy night when they receive an unexpected guest who reveals a very dark secret about the Parks' luxury home.

Parasite is currently my favorite film for 2019. I know it might be too early to call it, with movies like Ad Astra, Joker and The Rise of Skywalker still on the horizon. But it is hard to imagine any of the aforementioned films managing to outshine this one. At the very least it is the current movie to beat. The movie grips you from the very beginning, with its quirky sense of humor, before taking you on a full-blown journey into the dark recesses of the director's mind. And all the while, it treats you to some truly breathtaking cinematography that effectively captures the plights of the two families at its core.

I don't think I can recommend watching Parasite highly enough. It is every bit as mind-bending as Snowpiercer, despite being anchored in a contemporary setting while exploring identical themes. It is definitely a shoe-in for Best Foreign Language Film at next year's Academy Awards, and depending on how well it performs at the US box office when it releases next month, might even score Best Picture and Best Director nods. It truly deserves the highest honors it can get, and should stand as a masterclass of film-making for many years to come.
Posted by Michael Abayomi at 06:20