2014 was a strong year for faith-based movies, with films like Heaven is Real, Son of God, and most recently Exodus: Gods and Kings all making an impact at the global box office. But the one faith-based movie I was most excited about was Darren Aronofsky's Noah. Loosely based on the biblical account of the great deluge, the movie was a visual spectacle with great acting, and despite some significant deviations, still managed to retain the core message of its source material.

Groundhogs Day meets Starship Troopers in this trippy science-fiction movie about an untrained soldier who is forced to relive the same unwinnable battle with a formidable alien foe, over and over again. Tom Cruise stars alongside Emily Blunt, neither of whom are strangers to sci-fi movie roles. The movie strikes a delicate balance between grave and lighthearted, which helps make its gruesome battles that much more palatable.

Easily one of the best Marvel Cinematic Universe (MCU) movies till date, Captain America: The Winter Solider proves that a comic book adaptation can be handled with style and sophistication. Rather than take a more traditional approach, directors Anthony and Joe Russo decided to present the movie in the style of a 1970s conspiracy thriller, and the decision pays off, marking perhaps the best received entry in the MCU.

I'd spent a significant amount of my early childhood playing with legos, which might help explain why I was immediately drawn towards The Lego Movie. And there is a certain charm to the toyline's beautifully-animated big-screen debut. The movie was written and directed by Phil Lord and Christopher Miller, the comedic geniuses behind 2009's Cloudy with a Chance of Meatballs and the recent Jump Street movies.

Guardians of the Galaxy

Of all the MCU movies released thus far, Guardians of the Galaxy has come the closest to matching the tone of 2012's The Avengers. That said, the movie does require even more tolerance for the latter's comic nature. Most of that can be attributed to its cast of oddball characters, which include what is effectively a humanoid tree and a talking raccoon. Except the movie succeeds on so many levels that it takes these previously unknown characters, and makes them into household names.

Snowpiercer is a post-apocalyptic tale about a futuristic Noah's Ark. In this future, majority of the Earth's population have been wiped out by a self-inflicted ice age, and the handful of survivors take shelter in the titular train, where they are governed by a class-based system. Originally released in 2013, the movie stars Chris Evans, Tilda Swinton and Octavia Spencer, and it was directed by South Korean filmmaker, Bong Joon-ho.

X-Men: Days of Future Past

Timelines collide in X-Men: Days of Future Past, the latest installment in the superhero franchise that ties together the original trilogy with the 2011 reboot, X-Men: First Class. And once again, the movie centers upon Wolverine, who is sent back in time to prevent an event in 1973 that would alter the fate of all mutants. But for me, it was Quicksilver's brief appearance that stole the show, which culminated in one of the franchise's most visually-stunning action sequences.

In a year crowded with big-screen adaptations of young adult novels like Divergent and Mockingjay, The Maze Runner comes out on top as a smartly-executed introduction to a world we feel we've all seen before. What sets it apart from the aforementioned properties is its darker tone, as I remember feeling genuine dread the first time Thomas (Dylan O'Brien) steps into the maze. The movie is further helped by a competent cast and a well-written script.

How do you make a sequel to one of the biggest and boldest martial arts films in recent years? By going even bigger and bolder, which is precisely what director Gareth Evans does with The Raid 2. The fight scenes are so tightly choreographed that you can almost feel the impact of every single blow. The script on the other hand has been beefed up and expanded, resulting in the movie's two hour thirty minutes running time.

I usually make a point of reading the book before seeing the movie, which was why I finally read Gone Girl a few months ago. And boy was I blown away by the book's unlikely turn of events. But even that couldn't prepare me for the sheer suspense of watching those events play out on the big screen. The movie is a definite contender for next year's Academy Awards, and I foresee a best actress nod for Rosamond Pike and a best adapted screenplay nomination for Gillian Flynn, at the very least. 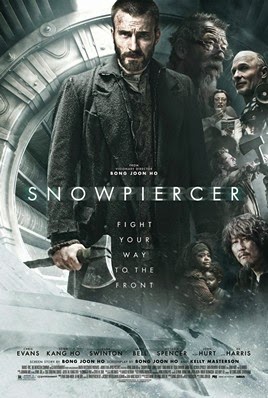 Yes. That's right. My favorite movie for 2014 is a South Korean movie that actually came out more than a year ago. How this science-fiction gem managed to elude me for that long is anybody's guess. But of all the movies I have shortlisted, no other one has left as much of a lasting impression. Was it the premise of a world frozen over and the survivors confined to a single train that won me over? Or the hard-hitting violence? Or Tilda Swinton's portrayal of the villainous Mason? Whatever it was, it is clear that Snowpiercer has become one of my favorite science-fiction movies of all time.