Röyksopp & Robyn - Do It Again

There is something undeniably electrifying about the way Do It Again jumps out at you, and that level of energy is sustained throughout the club banger's 5-minutes-and-something-seconds length. Perhaps this has something to do with the song's placement on the collaborative EP of the same name, making it stand out between the record's more somber tracks.

The first time I heard MAGIC!, I couldn't help thinking about UB40. After all, both bands share a similar sound rooted in reggae music. And just like the latter's hit single Can't Stop Falling in Love, Rude is a song that never seems to get old, no matter how many times you've listened to it.

5 Seconds of Summer - She Looks So Perfect

Whoever said punk rock was dead needs to be shot. Or at the very least, made to listen to 5 Seconds of Summer. The Australian band was brought to the limelight through the help of fellow teenagers, One Direction, but didn't find their current level of mainstream success until the release of their international debut single, She Looks So Perfect.

Drawing more influence from synth pop and indie rock than the electronic sound for which he was already known, Lionhearted marked a significant shift in style for American EDM artist, Porter Robinson. But it somehow manages to retain the essence of past singles like Language, resulting in a song that is sure to please fans, and at the same time grow his existing fan base.

The South African dynamic duo Liquideep have scored yet another hit, with the perfectly crafted House-influenced sound they've come to be associated with. Rise Again is a song built around growing synths and a feel-good message about picking yourself up from the ground when the world knocks you down.

I've never been a fan of Lana Del Rey. But you don't need to be one to appreciate her sultry vocals and the otherworldly melodies on West Coast. This is bolstered by the production efforts of Dan Auerbach of The Black Keys, who was instrumental in helping the song attain its unique blend of pop and surf rock. 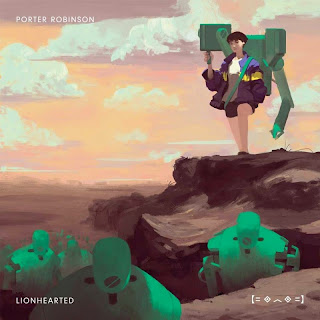 As crowded as the EDM scene might seem sometimes, some artists still manage to stand out and make a name for themselves. More often than not, this is usually due to said artist managing to score a runaway hit single that resonates with party goers the world over. But it is much rarer for that artist to find that success through the strength of their work alone. Such is the case with Porter Robinson, whose song Lionhearted is my ultimate feel-good song of 2014.
Posted by Michael Abayomi at 12:00