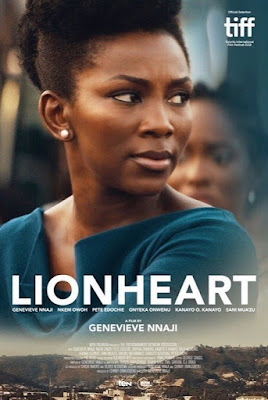 Remember that one time I took a trip down the rabbit hole by reviewing a certain much-talked-about Nollywood movie? Well, I figured it was about time I paid Nollywood another visit by tearing apart critiquing another one of its productions. And what better candidate than Lionheart, a movie that made the news when it became the first Nigerian film to be acquired by the online streaming service, Netflix. So of course, I wanted to know what might have prompted the acquisition, plus I was curious to see just how far our productions have come in the past two years.

Lionheart marks the directorial debut of veteran Nollywood actress, Genevieve Nnaji. She also co-writes and stars as the lead, Adaeze, daughter of the CEO of the titular company. Headed by Ernest Obiagu (Pete Edochie), Lionheart Transport is one of the largest transportation companies in Nigeria. But its prospects for the future are put in danger when its CEO suffers a near-fatal heart attack, forcing him to step down. Rather than appoint his more-than-capable daughter as acting CEO, he instead appoints his somewhat-eccentric brother, Chief Godswill (Nkem Owoh).

As if things were not bad enough, Adaeze also learns that her father had left the company with some very substantial debts in his bid to try and secure a very lucrative government contract. She has just 30 days to repay the loans or risk losing everything her father had worked for. Now, she and her uncle must set aside their differences and work together to raise the money, even while the entire company is under threat of acquisition by the CEO of a rival company, Igwe Pascal (Kanayo O. Kanayo).

If Lionheart is representative of the current state of our Nollywood productions, then I have to admit they've been some marked improvements since 2016. At least it was nice to see a Nigerian film that seemed to get the basics right. The production values were definitely there. The editors made sure the story flowed in a fairly logical way. The cinematographers made sure we saw what we needed to see at all times. The sound mixers ensured we could hear what was being said, not what some guy in the sound department felt were the trendiest Nigerian songs, playing several decibels too loud.

For a first time director, Genevieve Nnaji did a somewhat decent job behind the camera, which only goes to show how shoddy a job our other directors have been doing. She was also more than adequate in front of the camera, with her years of acting experience on full display. The acting was generally okay across the board, with Pete Edochie being the obvious standout, although there were more than a few supporting actors that sounded like their lines were being read by a digital assistant.

All that said, my main criticism stems from the way the film had been marketed to audiences. I'd taken one look at the movie's poster and I'd expected it to be a soaring drama. A soaring drama it was not, and what I'd gotten instead was closer to what you'd call a comedy, except it didn't have that many jokes and the few it had were not that funny. Maybe it is just the way that all Nigerian movies are made, forever hanging somewhere between being over dramatic and trying not to take itself too seriously.

Having watched the movie, I confess that I am none the wiser as to why Netflix had decided to add it to their streaming service. Perhaps it was nothing more than a business decision, an attempt to tap into our head-scratchingly lucrative home video market. The film did have a distinctly home video-like quality to it, albeit one with high production values. It was definitely better than some of their more recent acquisitions, including the internet meme generator, Bird Box. But then again, what isn't?
Posted by Michael Abayomi at 23:25