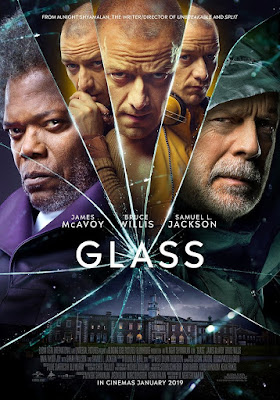 Few directors have recorded as many hits and misses in the past two decades as M. Night Shyamalan. And of all his successes, Unbreakable remains my favorite one, a unique take on the superhero origin story which came at a time when such movies were not considered mainstream or commercially viable. He'd won over critics and moviegoers alike with its surprise followup, Split, a psychological thriller released 17 years later. The movie was so successful that many considered it a return to form, so of course, we all anticipated the arrival of the final film in the trilogy, Glass.

The film opens with the Unbreakable David Dunn (Bruce Willis), who has since taken to fighting small-time criminals as The Overseer with the aid of his son, Joseph (Spencer Treat Clark). Having learnt about the actions of The Horde (James McAvoy) at the end of Split, David takes systematic walks through the city streets in the hope of coming in contact with anyone that might lead to finding him. The two superhumans eventually meet, but their showdown is cut short when both are captured by the authorities.

They are subsequently taken to a mental institution, where they meet Dr. Ellie Staple (Sarah Paulson), a psychologist that believes people like them are merely suffering from severe cases of delusion. It is her intention to treat both men, along with long-time psych ward resident, Elijah Price (Samuel L. Jackson), a comic book collector whose rare bone disorder had earned him the nickname, Mr. Glass. But unbeknownst to her, Elijah has been harboring plans of his own, and it involves her two newest patients.

I tried to go into Glass with an open mind, I really did. But nothing in this world could have saved the film from its head-scratching and very much convoluted finale. In his attempt to blindside audiences with one of his signature plot twists, Mr. Shyamalan has managed to undo much of the groundwork that had been laid by the two previous movies, and their associated brilliance. None of which is helped by the fact that none of it adds up, at least not within the context of the current film.

This is not to say it was anything as bad as Superman uttering the name, Martha, in the middle of a fight. Far from it. But the bait and switch nature of the twist makes it a poor choice, however you choose to look at it. Still, for all of its shortcomings, Glass remains a refreshingly different take on the superhero genre. The movie had its moments, and fans of Unbreakable would appreciate its adherence to that film's style and vision. It's just a shame that it couldn't have ended on a better note.
Posted by Michael Abayomi at 22:42