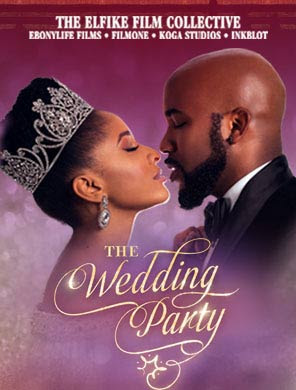 Well, this is a first. But whenever a movie gets touted for besting Rogue One at the local box office, then that movie had better damn well live up to that claim. Released locally on the same day as the recent Star Wars spinoff, The Wedding Party was the movie that had people flocking the various Lagos cineplexes all through the holiday season. So, of course, I was mildly curious and needed to see what all the fuss was about.

I'll start with a quick disclaimer: I am not the biggest fan of Nigerian movies. In fact, I tend to avoid them like the plague. This is due mainly to my inability to overlook their many artistic and technical shortcomings. That said, I'll try to keep this review as fair and free of bias as humanly possible.

The Wedding Party tells the story of an intercultural wedding between two high society families that don't exactly see eye to eye. It features an ensemble cast that include Adesua Etomi, Banky Wellington, Richard Mofe Damijo, Sola Sobowale and Iretiola Doyle. Set on the day of the titular party, the movie tries to capture the behind-the-scenes details of the typical Lagos wedding, in colorful and cartoonish fashion.

Unfortunately, the end result is plagued by the very same shortcomings that keep the vast library of Nollywood movies from being watchable. For a high-profile movie of this kind, the production values were surprisingly low. The editing was poorer than it had any right to be, with scenes cascading into one another with very little sense of purpose or direction. The sound mixing was even worse, with background music clashing with dialogue at every given opportunity.

As far as acting was concerned, the majority of the cast were content with mimicking the same caricatures we've seen in at least a dozen other movies. By and large, the biggest offender of the bunch was Richard Mofe Damijo, delivering his lines with the kind of hamfisted bravado that only a Nollywood veteran could muster. You can't blame him though, not when the script itself is laden with enough poorly-written dialogue and leaps of logic to make any recent Nicolas Cage movie look like high art.

The Wedding Party is a glorified home video masking as a proper theatrical release. The movie was so cheesy that by the time the end credits rolled, I felt like an overfed mouse. If you've managed to avoid seeing it at the cinemas this long, then I'd advise you continue doing so. There's simply nothing to see here, folks.
Posted by Michael Abayomi at 22:00