My Thoughts on the 59th Grammy Awards 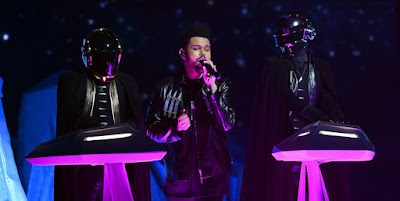 My post-Grammy analysis post is going up later than customary, but what can I say? It's been one of those weeks. The 59th Grammy Awards were held Sunday evening, and I was able to watch a recording of the telecast in its entirety during the week, even though this was managed in bits and pieces between mountains of work. Hosting duties were handled by James Cordon of Carpool Karaoke fame, and as could be expected, he had no problem holding the whole thing together while also managing to deliver a few quality gags along the way.

There was an overall sense of deja vu this year as Adele onced again cleaned out in the major categories, winning all 5 awards for which she'd earned a nomination. Her wins included awards for Record of the Year, Song of the Year, Best Pop Solo Performance, Best Pop Vocal Album, and of course, Album of the Year. She'd beaten out fellow musical juggernaut, Beyoncé, for that last award, and even went as far as renouncing the award to Beyoncé during her tearful acceptance speech.

Elsewhere, Drake and Chance the Rapper won the rap categories with 2 awards apiece, with the latter also scoring an additional win for Best New Artist. Beyoncé managed two wins for Lemonade (Best Urban Contemporary Album) and Formation (Best Music Video), a crying shame considering she'd gone into the ceremony with the highest number of nomitations (9). David Bowie was honored with 4 posthumous awards for his album, Blackstar, while Cage the Elephant beat out Blink -182 and Panic! at the Disco for Best Rock Album (Tell Me I'm Pretty).

In terms of performances, The Weeknd and Daft Punk made musical magic with their performance of one of my 2016 favorites, I Feel It Coming. Other standout performances include Shape of You (by Ed Sheeran), Chained to the Rhythm (by Katy Perry and Skip Marley), the Bees Gees tribute (by Demi Lovato, Tori Kelly, Little Big Town and Andra Day), and the hip-hop mashup between A Tribe Called Quest, Anderson .Paak, Busta Rhymes and Consequence. Bruno Mars also brought his A-game during his performance of That's What I Like and the Prince tribute, so no surprises there.

One thing that surprised me this year though were the sheer number of hiccups and mistakes that were caught on camera. We had everything from Adele fumbling her lines and having to restart a song, to a faulty microphone during the Metallica performance, to Greg Kurstin being rudely cut off during an acceptance speech. I realize such things are inevitable during a live event, but come on, this is the Grammy's we're talking about here, not some B-grade musical sideshow.