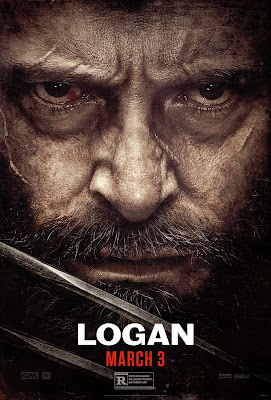 It's hard to imagine that Hugh Jackman has played the character of Wolverine for 17 years. But that is how long it has been since he first donned the signature adamantium claws in Bryan Singer's 2000 film, X-Men. So for his final outing as the character, we definitely needed a story that would bring the character's arc to a satisfying close. Logan is that suitable farewell, a solemn end to the Wolverine trilogy that is more character study than superhero movie.

The movie wastes no time in showing how it had earned its R rating, as we witness an older, washed out Logan violently take down a group of thugs. His story takes place in a dystopian near future where mutants are on the verge of extinction, and he is one of the last surviving members of the X-men. He works as a limo driver, a job that earns him barely enough money to buy the drugs he needs to keep an ailing Professor Xavier (Patrick Stewart) under control.

Aided by the albino mutant tracker, Caliban, the three of them have taken shelter in an abandoned factory somewhere across the Mexican border. Events are set into motion when Logan reluctantly accepts to transport a woman and her daughter to a safe haven called Eden. The pair are being hunted down by a team of cybernetically-enhanced humans called Reavers, who work for Transigen, a research facility from which the two had recently escaped. Thus Logan embarks on this final mission, one that will surely push his failing abilities to its limits.

My expectations were high going into Logan, and I am pleased to say that those expectations were met, if not exceeded. I loved the dramatic tone, as well as the near future setting. I also loved the intensely gruesome violence, which proves that an R rating really can improve a story of this kind. But most of all, I loved Hugh Jackman's portrayal of the title character, Logan, which was by far the movie's greatest accomplishment. The film plays like no other movie in the X-men franchise, eschewing genre conventions in favor of something more thought-provoking.
Posted by Michael Abayomi at 06:27