'Tis the season to be jolly. It is also the end of yet another year and, like previous years, time for me to highlight a few of my favorite things from the past year, as well as reflect on the events that shaped the year into what it was. Interested parties can check out posts from my 2016, 2015, 2014, 2013, 2012 and 2011 Year in Review series by following their respective links.

This year, I'll be kicking off the week-long series with a list of my favorite video games. That's right, no TV shows or books this year; guess I didn't see and read that much of either to warrant putting together a list. Also, 2017 has turned out to be quite the kick-ass year for gaming, producing some of the medium's greatest titles. So without wasting anymore time, here are my favorite video games of 2017.

The Legend of Zelda: Breath of the Wild

Nintendo released the latest installment in its long-running Legend of Zelda series, Breath of the Wild, alongside its hybrid console, the Nintendo Switch, all the way back in March. Since then it has gone on to sell over 5 million copies across both the Nintendo Switch and Wii-U consoles. The game received praise from fans and critics alike for breaking series conventions while setting a new standard and benchmark for open-world game design.

Guerrilla Games, the studio that brought us the Killzone series, released its brand new IP this year, Horizon: Zero Dawn. The action RPG takes place in a far future where mankind has regressed back to a primitive state, while animal-like robots have taken over the vast wilderness that remains. Players control Aloy, a hunter from one of the game's many tribes, who must hunt said robots for survival, as well as uncover the mysteries of the ancient civilization whose technology gave birth to the machines.

Take one look at Hellblade: Senua's Sacrifice and you'll be hard pressed to tell that it is the product of a small independent studio. Such is the artistry of the latest game by Ninja Theory. The game itself is a melding of different genres, with its hack-and-slash gameplay and survival-horror elements complimenting its dark fantasy setting. It is also notable for exploring the effects of mental illness on a person, with Senua's journey to Helheim mirroring her descent into psychosis.

I've been having the "video games as art" argument for as long as I can remember, but nowhere is my position more clear than with the debut release of StudioMDHR's Cuphead. The game is beautiful to behold, with an art style inspired by hand-drawn animation from the 1930s. Looks can be deceiving though, for beneath that beautiful veneer lies a punishing run-and-gun gameplay that is guaranteed to bring even the most seasoned Contra players to their knees.

Super Mario Odyssey is a love letter to fans of Nintendo's beloved mascot. It also marks the return to the sandbox gameplay found in Super Mario 64. The game introduces a key new mechanic in the form of Mario's companion, Cappy, and his ability to capture certain enemies and objects in the game. This opens up some very unique approaches to solving puzzles, as Mario tries to collect enough power moons to power his ship on his way to thwarting Bowser's wedding to Princess Peach.

The Legend of Zelda: Breath of the Wild 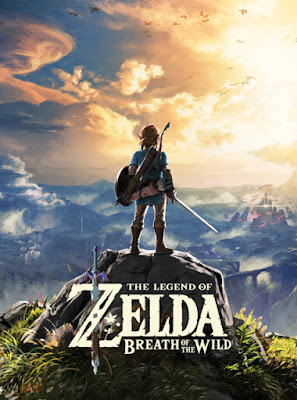 There is no doubt that 2017 would go down in history as a landmark year for video games in general. But no other game this past year has managed to reignite my love for the medium like The Legend of Zelda: Breath of the Wild, with its vast open world brimming with possibilities at every turn. I mean, I've invested well over a hundred hours into the game, spread over several months, and I am still discovering new shrines and things to do. That alone is an accomplishment that few games can boast of. Couple that with a beautiful musical score and solid overall presentation and what have you? One of the greatest (if not THE greatest) video games of all time.

P.S: Merry Christmas everyone! Thanks for reading, and be sure to check in tomorrow when I reveal my favorite songs for the year.
Posted by Michael Abayomi at 09:00