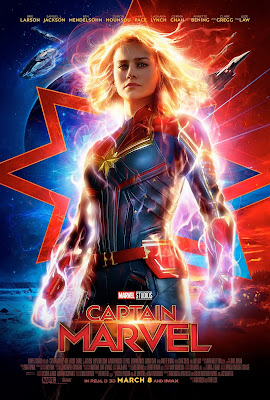 For those of you wondering why I am only just posting this review, this is due to the fact that the release of Captain Marvel in Nigeria was delayed by a week because of last week's gubernatorial elections. An annoying development for sure, considering that we'd all been waiting for it since that post-credits scene in Avengers: Infinity War last year. Thankfully, the excitement surrounding the movie had not been dampened by the delay, with the movie itself proving to be worth the extra wait.

Set in the mid-90s, the movie stars Brie Larson as Carol Danvers, the US Air Force pilot that would become what is being billed as Earth's mightiest avenger. When the film opens, she is part of the Starforce, an elite squad of soldiers fighting for the Kree Empire in their war against the Skrulls, a rival alien race. She has no memory of her Earth origin, or the origin of her special abilities, but she is trained to control them by her mentor, Yon-Rogg (Jude Law). During a mission to rescue a Kree spy on a Skrull base, she is captured by the Skrulls and taken aboard one of their spaceships.

Her memories are probed by the Skrull leader, Talos (Ben Mendelsohn), who is hoping to find information about the whereabouts of a device called the light-speed engine. She manages to break free of her refrains during his probing, and she uses an escape pod that crash lands on Earth, where she meets S.H.I.E.L.D. agents, Nick Fury (Samuel L. Jackson) and Phil Coulson (Clark Gregg). She struggles to bring both men up to speed on the war between the Kree and the Skrulls, but it doesn't take long before they are all swept up in the throes of that war.

Going into Captain Marvel, there were three main questions I felt the movie needed to address: who is Captain Marvel? Where has she been through all the global threats the Avengers have been fighting over the years? And is she powerful enough to stop Thanos? The movie doesn't only give satisfactory answers to all three questions, it also poses several questions of its own, some of which can only be answered in a post-Avengers: Endgame sequel. As a standalone movie, it delivers all the action, spectacle and laughs that fans have come to expect from the Marvel Cinematic Universe (MCU), even though it never quite reaches the heights of some of its finer offerings, or even attempts to, which is okay.

It was always going to be tricky introducing another superhero origin story this late into the overall Infinity Gauntlet story arc, but Captain Marvel fits so nicely into the already-established MCU that it is little wonder why her movie hadn't been released sooner, alongside Phase One origin stories like Iron Man, Thor and Captain America: The First Avenger. The film even has a simple style and tone more in line with the films of that phase. But what it lacks in comparison to some of the more stylized movies of later phases it more than makes up for in the sheer promise of her forthcoming appearance in Avengers: Endgame next month.
Posted by Michael Abayomi at 08:58