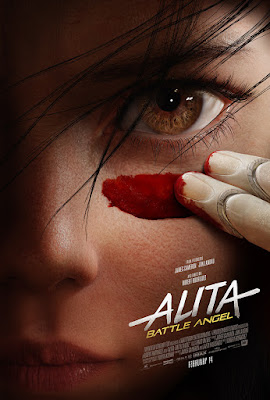 As readers of this blog might have already gleaned, I have a really strong affinity for works of science fiction, being a writer of such works myself. And Battle Angel Alita, or Gunnm as it is known in Japan, was a cyberpunk manga series that came to my attention when a review of one of my books had pointed out similarities between the two. I was immediately intrigued by its existence, but never managed to get my hands on it to see for myself, until now. Directed by Robert Rodriguez, Alita: Battle Angel is a film adaptation of the comic book series.

Set in a far future following an interplanetary war known as The Fall, it tells the story of a cyborg (Rosa Salazar) whose working remains are found in a scrapyard by a scientist named Dr. Dyson Ido (Christoph Waltz). She is rebuilt and wakes up with no memory of her past life, not even a name. Dubbed Alita by Dr. Ido, she approaches everything in her new home of Iron City with a childlike wonder. But traces of her mysterious past start to show when she and the doctor are attacked one night, discovering she is trained in an ancient form of martial arts called Panzer Kunst.

Deducing that such encounters might help trigger memories of her past, Alita seeks to become a Hunter-Warrior, a registered bounty hunter that hunts down wanted cyborgs for the government. She also takes an interest in the gladiatorial Motorball, against Dr. Ido's wishes, after she is introduced to the sport by Hugo (Keenan Johnson), a boy she befriends and develops feelings for. But it doesn't take long before her activities are brought to the attention of Vector (Mahershala Ali), a shady businessman who trades in cyborg parts, and his mysterious benefactor, a scientist named Nova (Edward Norton).

The first aspect of Alita: Battle Angel that strikes you is how gorgeous the visuals look. For a movie that seemed to be stuck in development hell for close to two decades, the finished product is remarkable indeed. The film was written and produced by James Cameron, who was originally slated to direct but had to pass directing duties over to Robert Rodriguez due to his work on Avatar and its long-awaited sequels. Neither man is a stranger when it comes to making visually-striking movies, so its beautiful blend of live-action and CGI should come as no surprise.

Much like last year's Ready Player One, the movie also boasts of some excellent world-building, although I guess we have the source material to thank for that. I haven't read any of the comics, or seen its anime adaptations, so I can't comment on how well it has been translated to the big screen. But what has made it over into the movie is very much intriguing stuff, even though it sometimes felt like the movie was barely scratching the surface of all its source material has to offer.

Thankfully, the movie also serves as setup for potential sequels (for better or worse) should it prove successful enough to warrant making one. So here's hoping that it doesn't go the way of Mortal Engines and that it finds a large enough audience.
Posted by Michael Abayomi at 07:21