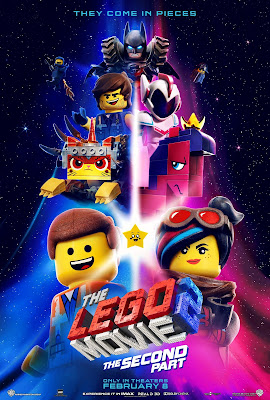 In 2014, The Lego Movie introduced moviegoers to the Master Builders of Bricksburg (not to mention the insanely catchy theme song, Everything is Awesome). Since then, we've had two other movies in the Lego Movie franchise, The Lego Batman Movie and The Lego Ninjago Movie, both of which were released to varying degrees of success, but neither one quite reaching the high bar set by the first one. The Lego Movie 2 therefore marks an attempt by the filmmakers to serve up more of the eye-catching visuals and side-splitting comedy that made the first movie so great in the first place.

It's been 5 years since Bricksburg was invaded by aliens from the Systar System, turning the once beautiful metropolis into a post-apocalyptic shell of its former self. It's citizen have since adjusted to life in Apocalypseburg as it is now known, except Emmet (Chris Pratt) of course, who is still holding on to the steadfast belief that "everything is awesome." He is forced to come to terms with the harsh times though when his friends and girlfriend, Lucy/Wyldstyle (Elizabeth Banks), are kidnapped and taken to the Systar System by General Sweet Mayhem (Stephanie Beatriz).

Using his Master Builder skills, Emmet builds a spaceship and embarks on a rescue mission. Except he doesn't get too far into his journey before he requires some rescuing of his own, which comes by the hands of Rex Dangervest (also voiced by Chris Pratt), a "galaxy-defending archaeologist, cowboy and raptor trainer." Meanwhile, Lucy and the other Master Builders are brought before the shape-shifting ruler of the Systar System, Queen Watevra Wa'nabi (Tiffany Haddish), who reveals her plans to unite their two kingdoms, which includes brainwashing them with the aptly-named Catchy Song.

The Lego Movie 2 is everything you'd expect in a sequel to a beloved animated film. It doubles down on the humor and overall silliness of the first film, while also introducing more characters and musical numbers. The animation is also as vibrant and eye-catching as it has ever been, successfully creating the illusion that it was achieved using stop-motion techniques. That said, it was always going to be tough to recapture the same level of fun and childish wonder that made the first film so great, since its sense of novelty is already lost at this point.

Much like the original, events in the sequel are driven by an overarching narrative, which results in even more live-action scenes sprinkled throughout the movie (a decision that had resulted in the first film failing to be considered for an Academy Award in the Best Animated Feature category). Except here the overarching narrative is not as deep or touching as the one featured in the first film. We do get to see fellow SNL alum Maya Rudolph though, who plays the wife to Will Ferrel's The Man Upstairs.

To summarize, if you happened to love and embrace the wackiness of the first Lego Movie, chances are you'd like this one as well. But if you didn't enjoy the first one or you've locked up your inner child and threw away the key ages ago, then there is nothing new here that would win you over.
Posted by Michael Abayomi at 08:28