My Thoughts on the 60th Grammy Awards 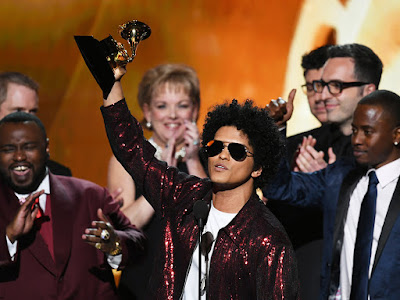 The 60th Grammy Awards were held last night, during which Bruno Mars basically pulled an Adele, cleaning out in all six categories in which he'd been contending. These included the three biggest awards of the evening, Song of the Year, Record of the Year and Album of the Year, taking home the awards for his songs, That's What I Like, 24K Magic, and his 2016 album of the same name. This of course came at the expense of Kendrick Lamar and Jay-Z, who were also contending for those very same awards.

But at least Kendrick managed to clean out in the rap categories, winning five awards in total, which is five more than Jay-Z received from his eight nominations. Yep. That's right, Jay-Z went home empty handed despite leading the nominations going into the awards. This is particularly disheartening for the jigga man and his fans alike when you consider how critically acclaimed his 4:44 album was, but it can be argued that it had been eclipsed by Kendrick's own critical darling, DAMN!

Elsewhere, I was admittedly disappointed that Nothing More didn't win in any of the three categories they'd been vying for. But the band is relatively young, at least compared to the likes of Foo Fighters and the late Leonard Cohen, so if they keep churning out great music in the years to come, it is only a matter of time before they receive some much-deserved recognition.

Other notable wins include The Weeknd, who won Best Urban Contemporary Album for Starboy, although it is a bit of a head-scratcher why this album didn't get any recognition outside that category. Ed Sheeran also got some love in the pop categories, winning both Best Pop Album for ÷ and Best Pop Solo Performance for Shape of You. It is also worth noting that Despacito didn't win any awards, to my great relief, but we did have to endure a performance of the song during the telecast.

Speaking of performances, there were ballads aplenty, but the performance that had everyone talking was by Ke$ha, who was joined by Camila Cabello, Cyndi Lauper, Julia Michaels, Andra Day and Bebe Rexha for a rendition of her song, Praying. All in all, it was a very safe and politically correct Grammys last night, with Bruno Mars being singled out by the voters for honor due mainly to the fact that the music he'd released during the eligibility period was the most appropriate and in tune with their sensibilities.
Posted by Michael Abayomi at 17:34