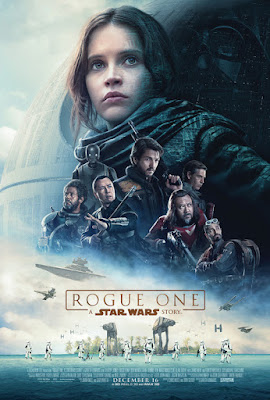 Coming off the incredible success of last year's Star Wars: The Force Awakens, the Walt Disney company had Star Wars fans waiting in anticipation for Rogue One, the first of the planned standalone movies intended to tide us over between the numbered releases. But ever since the company had acquired the rights to the franchise in 2012, many had feared that it would be turned into a watered-down, family-friendly shadow of its former self. As though to assuage those very concerns, Rogue One is not only a worthy addition to the franchise, it is also the most mature Star Wars movie till date.

Set shortly before the events of Episode IV: A New Hope, Rogue One tells the story of the Rebel Alliance fighters who risked their lives to steal the plans of the Death Star, a weapon capable of destroying an entire planet. As spoilerific as that statement sounds, it was liberally used in the film's marketing, and was in fact alluded to in the opening crawl of the 1977 original movie. And speaking of opening crawls, Rogue One is the first movie in the franchise not to feature the signature opening crawl that provided some backstory to the numbered releases. In its place is a cold open that effectively sets the tone for what is to come.

The film opens with the violent abduction of an Imperial Military research scientist, Galen Erso (Mads Mikkelsen), who'd been working on the design of the Death Star before he'd gone into hiding with his wife and daughter. His wife is killed in the process, but his daughter, Jyn, manages to escape before being rescued by the veteran-fighter-turned-radical, Saw Gerrara (Forest Whitaker). Years later, she (Felicity Jones) is shown in captivity, but is once again rescued, this time by the Rebel fighter, Cassian Andor (Diego Luna) and his reprogrammed Imperial droid, K-2SO (Alan Tudyk).

They take her to the Rebel Alliance, where she is coerced into helping them find her father through the help of Saw Gerrara, who'd abandoned her years before. Parallel to this, an Imperial pilot named Bodhi Rook (Riz Ahmed) also seeks Gerrara, defecting to the planet Jedha with a message from Galen Erso. Jyn, Cassian and K-2SO arrive at Jedha, where she eventually meets Bodhi and Gerrara, as well as a blind warrior named Chirrut (Donnie Yen) and his bodyguard of sorts, Baze (Jiang Wen). There she learns of the fatal flaw her father had built into the Death Star with the hope that its knowledge would somehow aid the rebellion, which sets into motion events that would have the fate of the entire rebellion resting on the shoulders of a rather unlikely band of heroes.

Even though the story might read like the perfect setup for a heist movie, Rogue One is actually a movie about war first and foremost. It shows a grittier side of a universe most of us mainly associate with Jedis and lightsaber duels. Except there are no Jedis to root for here. Instead we get plenty of in-the-trenches action, as well as some of the best space battles in the series till date. Needless to say, main characters die in all manner of gruesome ways, some before we actually get a chance to know them. But each actor imbues their character with so much life that you'll be hard pressed to notice, which is incidentally one of the first things that attracted me when the movie was originally announced, the stellar cast.

Rogue One proves that there is much to be explored outside the storylines of the Skywalker family. Unlike The Force Awakens that relied a bit too heavily on nostalgia, the movie succeeds on its own terms by not being afraid to deviate from series conventions, all the while not straying too far from the history that has already been set by previous releases. Its greatest accomplishment is how smoothly it segues into Episode IV, with the movie ending just where A New Hope kicked off. It also happens to have what is now my favorite scene in the entire series. Who knew that this much potential could be expanded from what was once just a few lines of text.
Posted by Michael Abayomi at 09:00