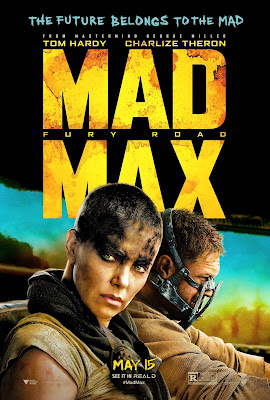 It is barely one month into summer and we are already being treated with one of the finest action blockbusters to come along in a long time. I am of course referring to the latest installment in George Miller's post-apocalyptic series, Mad Max: Fury Road. It's been 30 years since the last movie, Mad Max: Beyond Thunderdome, was released, and as such the new movie serves as a soft reboot of sorts.

To prepare myself for the movie, I had spent the last few days revisiting the original trilogy. That said, I don't think anything could have possibly prepared me for the edge-of-your-seat awesomeness that is Fury Road. The action grabs you by the throat even before the title card is shown, and it doesn't let go until the credits roll. Who knew that life after the apocalypse could be that intense, or look so stunning?

The movie opens with Max (now played by Tom Hardy, who replaces Mel Gibson in what was essentially Mel Gibson's breakout role) being chased by the War Boys, a gang of pale-skinned psychopaths. He is captured and taken to their hideout, the fortress-like Citadel, where we are introduced to their leader, Immortan Joe. We are also introduced to Imperator Furiosa, a hardened one-armed woman whose decision to steal Immortan's "five wives" in a makeshift armored tanker kicks things into gear.

The bulk of the movie is spent on the titular Fury Road, as the women, aided by a reluctant Max, try to elude capture by Immortan and his army of road warriors. And it is here that the movie truly shines, as we are treated to the aforementioned action, which takes place across a beautiful post-apocalyptic desert landscape. The stunts are simply insane, and the fact that most were done practically makes them even more so. The only exception to this was one breathtaking scene that took place inside a sandstorm.

The movie isn't all high-speed chases and explosions though. As simple as the story sounds, it is amazing how much depth it allows its characters. This is especially true of Furiosa, who is played by Charlize Theron in what is sure to be yet another landmark acting role in her already highly-regarded acting career. Tom Hardy also does a more than adequate job as Max, as well as Nicholas Hoult who plays the overzealous War Boy, Nux.

Overall, the movie manages to blow all recent action movies out of the water, and should stand as a template/standard for all future reboots; I can't recommend it highly enough.
Posted by Michael Abayomi at 09:00