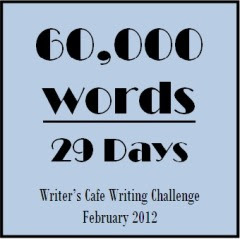 Today marks the end of the ongoing Kindleboards February Writing Challenge. In case you're just getting wind of this and wondering what it is, it's something a bunch of the writers in the Kindleboards Writer's Cafe have been participating in. The goal of the challenge was to write 60,000 words in the month of February (that's 29 days). It's sorta like NaNoWriMo, only more words and less days.

Well, it's been a long and hard 29 days, rife with everything from illness to self doubt. But what kept most of us going, amongst other factors, was the public-shaming nature of the challenge. We were required to log our daily numbers in the official challenge thread, where we could also discuss our individual progress and encountered hardships. It was quite a refreshing experience to see and hear from so many writers around the world.

We all got into the challenge for various reasons. For example, I was hoping to draft books 4 & 5 of my WIP, Guardians and the Lost Paradise. But basically, it was a need to write that drew us to the challenge. I had already said in an earlier post that this was to be the year that I made the transition from aspiring writer to actual writer. But I found myself spending the most of January trying to generate some much-needed buzz for my books recently released through Amazon.

Looking back, I remember the amount of pressure I felt on Day 1. Up until then, I had always written at my leisure, sometimes taking years to finish what I started. So it's understandable why I felt some mild trepidation at the start of that session. But at the end of it, I was 2,400 words closer to the goal. The two other milestones I most remember were crossing 10,000 words on Day 5, and finishing my draft of book 4 on Day 10 at 21,000 words.

Now, I have drafted both books 4 & 5, with 6 already under way. My final total word count for the challenge is 50,000 words. I know, it's 10,000 words short of the goal, but this is the most I have written in... forever! I still have at least 40,000 words worth of story left to tell. So I plan on taking the momentum already built and rolling the ball through to the end of March. Who knows, I just might have the entire series drafted by then.

I have learnt quite a few lessons during the challenge, the most important of which is the value of perseverance. There were days where the words came naturally, and others where I hit quite a few walls. I have also discovered what seems to be my comfort zone in terms of daily word counts (1,500 words or thereabouts). What remains is to transcend these lessons into actual practices.

Posted by Michael Abayomi at 19:00