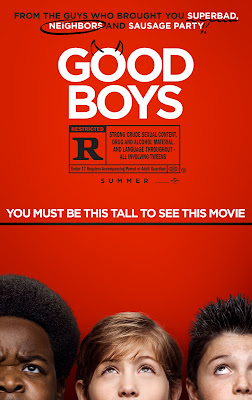 It might come as a bit of a surprise, but till today, Superbad remains one of my favorite movies of all time. There was just something timeless about the unabashedly comical antics of its two leads. Most of that comedy gold can be attributed to the writing duo of Seth Rogen and Evan Goldberg of course, the two of whom would go on to work on the equally raunchy Pineapple Express, This is the End, and Sausage Party. So from the moment I'd heard that they were producers on Good Boys, I was sold.

The film centers on the misadventures of three sixth graders who have been friends since kindergarten, Max (Jacob Tremblay), Lucas (Keith L. Williams) and Thor (Brady Noon). Max has been harboring a crush on a classmate named Brixlee (Millie Davis), so when he is invited to his first ever "kissing party" by popular kid, Soren (Izaac Wang), he sees it as an opportunity to finally make his move. But first, he needs to learn, with some help from his friends, precisely how to kiss a girl.

Things do not go according to plan of course, and the drone is captured by the girl, Hannah (Molly Gordon), and her good friend, Lily (Midori Francis). And when the girls refuse to return the captured drone, the boys are forced to steal one of their bags as leverage. Unbeknownst to them, the bag contains some ecstasy, and they soon find themselves being pursued by the two girls, skipping school to meet with a presumed pedophile, and more, all in a bid to set things right before the kissing party.

Good Boys is easily the funniest movie I have seen all year. Its crude humor might tether on the very edge of being overbearing, but what saves it from going that route is its powerful themes centered around friendship; the movie depicts how even long-time friendships might change and evolve over time, and how that is not only inevitable but also a welcome part of this journey we call life. The fact that it manages to do that in its relatively short runtime is also worthy of praise.

Ultimately, your enjoyment of the film would depend on how much tolerance you have for watching a group of potty-mouthed middle-schoolers thrust into increasingly inappropriate situations. But the fun comes from watching how these boys choose to navigate those situations, with their boyish naivety and overall good intentions still managing to shine through at the end of the day.
Posted by Michael Abayomi at 10:42