Ant-Man and the Wasp (Movie Review) 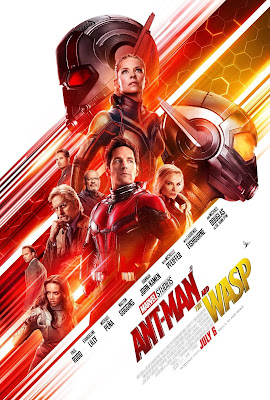 Much like they did in 2015, the folks at Marvel Studios have chosen to follow up another Avengers movie with an outing of their ant-sized heroes. And of course, after the gut-wrenching finale of Avengers: Infinity War two months ago, you can be sure that fans have been waiting for Ant-Man and the Wasp, looking for answers, or closure, or a bit of both. Except the filmmakers have their own story to tell, be it one that is on a smaller scale and with relatively smaller stakes.

Set following the events of Captain America: Civil War, the movie finds Ant-Man/Scott Lang (Paul Rudd) undergoing house arrest for assisting Team Captain America in its fight against Team Iron Man. Scott is just days away from serving his sentence when he receives a message from Janet van Dyne (Michelle Pfeiffer), who has been trapped in the quantum realm for some thirty odd years. This leads him to contact Hank Pym (Michael Douglas), her husband and inventor of the Pym particle.

Scott is broken out of house arrest by Hope van Dyne (Evangelline Lilly), aka the Wasp, who you'll remember had assumed the mantle during the mid-credits scene of the last film. The two of them must work together with Hank to rescue Janet. Except they have to contend with not only the authorities (Randall Park) and a black market dealer (Walton Goggins), but also a mysterious masked woman known as Ghost (Hannah John-Kamen), who can phase through walls and uses this ability to steal Hank's lab (yep, the entire lab) with hopes of also finding Janet for personal reasons.

If you're one of those expecting Ant-Man and the Wasp to provide answers to some of the questions you had after Avengers: Infinity War, then I'd have to say prepare yourself for some measure of disappointment. The movie is as self-contained as they come.There is not an Infinity Stone in sight. What we get instead is much talk about quantum realms and particle accelerators. Thankfully, the movie itself is just as funny as the first one, with Michael Peña once again stealing the show with his portrayal of the fast-talking ex-criminal, Luis.

The movie also boasts more of the inventive action sequences we saw in the first film, making great use of its heroes' abilities to switch sizes. But for those still wanting to know how all this ties into the greater ongoing drama of the MCU, I'll say this much: be sure to wait for the mid-credits scene. It might not provide all the answers, but at least it places the film within the context of that other movie.
Posted by Michael Abayomi at 06:17