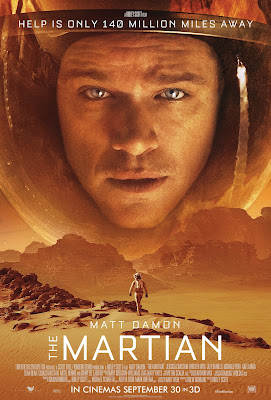 Every now and then, a movie comes out of left field and completely blows you away. I had heard about the impending arrival of The Martian, but I didn't really look into it until the reviews started pouring in. I quickly found out it was based on a bestselling novel which was originally self-published on Amazon. And just like that, I was immediately compelled to go see it at the cinema.

The movie tells the story of NASA astronaut Mark Watney, who is stranded on Mars after he is struck and impaled during a severe sandstorm. He is thought dead by his crew mates, and a funeral is even held in his honor down on Earth. He awakens after the storm and is forced to grasp with just how dire his situation is; he is not only wounded, but without means of contacting his crew or NASA. And with limited food and supplies, it is only a matter of time before he either starves, suffocates or freezes to death.

But rather than curl into a ball and wait for death to find him, Mark decides to take matters into his own hands. This he does by devising a string of clever solutions to the various problems the red planet throws at him, all of which he documents in a series of video logs he hopes would be recovered someday. His activities are eventually picked up by satellite images, and soon the whole of NASA is committed to bringing him back home alive, with the whole world watching and rooting for him from the sidelines.

Before going to watch the movie, I had read and quickly devoured the book, which was awesome by the way, if you don't mind all the extraneous information about the various sciences that it explores. A lot of that information had to be dumbed down or abstracted away for the movie of course, but thankfully, they kept the source material's lightheartedness, for therein lies the movie's overall appeal.

The movie features an ensemble cast, with each one having his or her own role to play in Mark's rescue. And while they were no stand-out performances to speak of per say, I especially loved Donald Glover a.k.a. Childish Gambino, who played Rich Purnell, the scientist that comes up with the daring maneuver behind the rescue attempt.

It's nice to see a resurgence in realistic, space-based science fiction movies. This was started by Gravity in 2013, and followed by the success of Interstellar in 2014. And now we can add The Martian to that list. But of the three movies, this is the one I would recommend the most, if only because it is the only one to carry a particularly strong message of hope in the face of adversity.
Posted by Michael Abayomi at 12:10