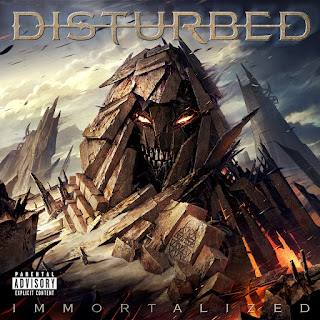 Two months ago, the heavy metal band known as Disturbed took fans by surprise when they announced the August 21st release of their sixth studio album, Immortalized, an announcement that was sweetened by the instant availability of its lead single, The Vengeful One. This was following a rather lengthy gap since the 2011 release of their compilation album, The Lost Children, and it effectively brought an end to their hiatus.

In readiness for the awesomeness that was sure to come, I had spent the past two months listening to their entire back catalogue, starting with their hard-hitting debut, The Sickness (2000), before moving on to Believe (2002), the album that marked the start of their gradual shift from heavy metal to hard rock, a trend that became more glaring in their subsequent albums, Ten Thousand Fists (2005), Indestructible (2008), and my personal favorite, Asylum (2010).

And now that the new album is almost upon us, fans are being treated once again as the entire album has been made available for streaming on iTunes and Spotify. I've listened to the album a couple of times now, and while I don't consider it their finest, I still think it is a worthy addition to their catalogue, with its fair share of highs and lows.

Just like with Asylum before it, the new album opens with an instrumental track that foreshadows and segues into its title track, Immortalized. This is followed by The Vengeful One and Open Your Eyes, the latter boasting one of the heavier guitar riffs on the album. Thereafter, the album quickly devolves into Nickelback/Theory of a Deadman territory with songs like The Light, You're Mine and the somewhat head-scratching ode to marijuana, Fire It Up.

Equally as head-scratching is the slow-paced cover of the Simon & Garfunkel song, The Sound of Silence. I know it really wouldn't be a Disturbed album without one such cover, but this one would've probably been better served as an album closer or dare I say a bonus track. I mean, the song allows lead singer David Draiman to shine like never before, but you can't shake the fact that it is still essentially a piano ballad in the middle of what is supposed to be a heavy metal record.

The deluxe edition of the album contains three bonus tracks, the strongest one in my opinion being Legion of Monsters. Another standout from the album that is quickly growing on me is Who, with its simple yet poignant sing-along chorus. In summary, if you're a fan of the band, then there's perhaps enough material here to justify the 5-year wait between Asylum and Immortalized. But if you're not, and are looking to get into their music, then I'd advise you start with Asylum or The Sickness instead.
Posted by Michael Abayomi at 09:00