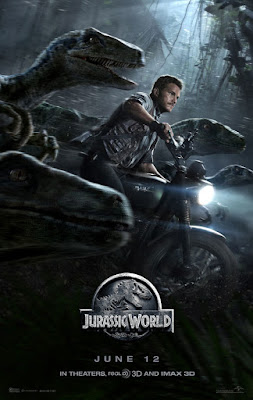 Yep. The poster says it all really. But as preposterous as the scene depicted on the poster might seem, the latest entry in the Jurassic Park series proves that watching a bunch of dinosaurs running loose and causing havoc is still as fun today as it was 22 years ago, when the first movie was released.

Jurassic World is the fourth movie in the franchise, but it serves as a direct sequel to the original film, choosing to ignore (for the most part) the events of the second and third movie. According to its timeline, a second dinosaur theme park (the titular Jurassic World) has been in operation for several years, but it has recently come under the threat of declining attendance levels, as the novelty of having a park full of living, breathing dinosaurs continues to fade.

This prompts the owner of Jurassic World to seek out a way to rekindle public interest in the park, by asking his chief geneticist to engineer a new breed of dinosaurs that would do just that. Their answer to the problem is the dinosaur dubbed Indominus Rex, a dinosaur hybrid that was specifically engineered to be the most ferocious of its kind. And the dinosaur lives up to that claim when it breaks out of captivity, to appropriately spectacular and chaotic effect.

It didn't take very long for me to realize just how closely this movie has been modeled after Jurassic Park. Much like the first film, this one starts slowly, taking the requisite amount of time to establish its premise and introduce its key players, with lead actor Chris Pratt failing to make an appearance until about thirty minutes into the film. But once the chaos begins, the action never let's up, and we get to experience the same level of tension we saw in the first film.

And therein lies the movie's greatest shortcoming, that sense of déjà vu that seems to pervade every other scene. Some might call it simple fan service though, and if that is the way you choose to look at it, then the movie-makers have achieved precisely what they set out to accomplish. They've created a worthy successor to Steven Spielberg's original vision, and a viable starting point for a new chapter in the Jurassic Park saga.

Posted by Michael Abayomi at 11:30