The 2014 Blogging from A-Z Challenge 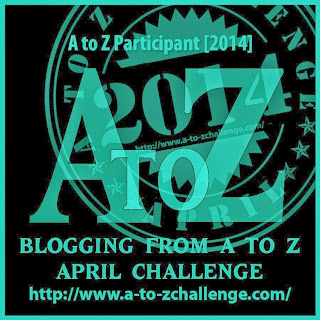 I've been sitting on the fence regarding this one for a while now. But after much deliberation, I have finally decided to give the 2014 Blogging from A to Z challenge a go. That's right, I am all signed up and I've even got the badge to prove it. And just like I did in my past two years of participation, I'll be going in with none of my posts written beforehand. Scary, but all the more exhilarating.

For the benefit of those who don't know, the Blogging from A to Z challenge is a month-long blogfest that has been held every April since its inception by Arlee Bird in 2010. The goal is to post every day in April, save Sundays, with each post centering upon a different letter of the alphabet, starting with the letter A on the first day, and culminating with the letter Z on the last. Anyone interested in signing up can do so here.

I had to think long and hard before I finally settled upon this year's theme. In 2012, I went with a movies theme. Last year, I decided to go with speculative fiction books. This year, I have chosen another area of interest, namely video games. But as I quickly found out while trying to plan my future posts, I have way too many favorite games that settling upon one for each letter of the alphabet seems almost impossible.

So, instead of highlighting my favorite video games for the challenge, I have decided to broaden the scope and highlight my favorite video game franchises. So rather than pick just one out of, say, a hundred Mario games, I can just pick the franchise as a whole. But even then, I would still have to forgo several other franchises; Megaman, Metroid and Metal Gear are but a few from the above example.

All the same, I am really looking forward to this year's challenge. Half the fun is discovering new blogs and the fantastic bloggers behind them. My oft-neglected blog could also use the activity. So here's hoping that I am able to make it to the very end.
Posted by Michael Abayomi at 14:30